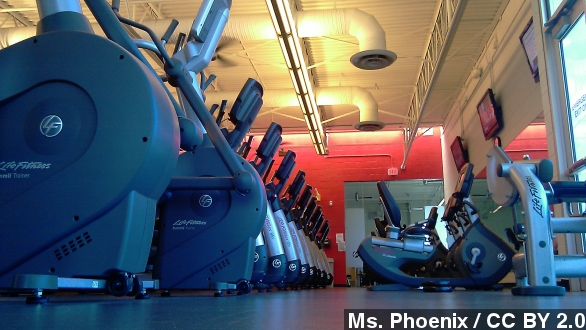 Go to the gym to stay healthy? Well, watch out, the air might be poisoning you.

Researchers in Portugal and Holland found the air in the gyms they studied was really polluted.

To find this, they put air-quality monitoring equipment in gyms throughout Lisbon. They covered weight rooms and aerobic areas, as well as smaller studio spaces.

The machines measured air quality during the busy late afternoon and evening hours and also gathered information when the gym wasn't as busy so researchers could compare the readings.

And the levels were highest during the evening classes when large groups were working out in a confined room.

The study points to poor ventilation and cleaning as possible reasons why this might be the case.

Researchers said the high levels of dust and formaldehyde can be harmful as they can contribute to asthma and other respiratory issues.

And, carbon dioxide can cause fatigue, which is particularly undesirable for those who are trying to exercise.

Researchers say gym goers are likely breathing in a whole lot of this polluted air as exercise makes you breathe heavily, meaning "The pollutants go deeper into the lungs compared to resting situations."

And the United States Environmental Protection Agency warns indoor air pollution exposure typically increases as we head into the colder months because we spend more time indoors — or in this case at the gym instead of working out outside.

Now, researchers say this doesn't mean you should stop going to the gym. Just try to choose one that looks clean and talk to your gym's management if you have concerns or the air doesn't smell reasonably fresh.