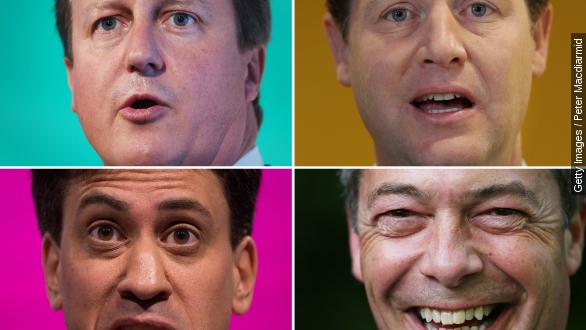 SMS
Your Guide To Britain's Massive Seven-Way Leaders' Debate
By Matt Picht
By Matt Picht
April 1, 2015
British broadcaster ITV is hosting a big political debate Thursday, and it's invited the heads of seven big political parties to duke it out.
SHOW TRANSCRIPT

"There are questions that need to be asked. Get answers with the ITV Leaders' Debate live," presenter Julie Etchingham said.

On Thursday, British broadcaster ITV will host the second of four planned televised political debates before the general elections in the United Kingdom May 7.

The debate is particularly significant because it's the only opportunity the candidates for prime minister — the Labour Party's Ed Miliband and the Conservative Party's David Cameron — will have to directly debate each other.

But they won't be the only politicians on stage. ITV also invited the heads of five other parties to participate in the debate, which means the British public gets to enjoy the spectacle of seven top politicians trying to talk over one another.

ITV presenter Julie Etchingham has the unenviable task of keeping a seven-way debate moving smoothly. She told the Radio Times last week, "If I have to be quite sharp in making sure that people stick to their timings, then I will be."

The debate will be divided into four topics: the economy, the National Health Service, immigration and the future of the UK. Each leader gets to make a brief opening statement on the topic, after which Etchingham will lead them through a moderated debate on pre-screened questions from the studio audience.

Despite the crowded stage, Cameron vs. Miliband is expected to be the contest of the night. The men are the only two leaders who have a chance of forming the next government.

During the previous debate, host Jeremy Paxman told Cameron, "You talked about broken Britain and fixing it. You haven't; it's more broken than it was."

The debates could give one party a valuable edge. Miliband’s scrappy performance in the first election special gave his Labour Party a 4 percent bump in the polls.

And while Miliband and Cameron duke it out, they'll also have to fend off attacks from the other five party leaders. (Video via Liberal Democrats)

Since they can't hope to form their own government, the smaller parties are looking to win influence with the new government — and maybe even earn a spot in the ruling coalition.

That means they've got a vested interest in attacking Cameron and Miliband — either to shore up ideological support or to siphon sympathetic votes from the two big parties.

The debates take place April 2 at 8 p.m. London time. American viewers can catch the debates on C-SPAN at 3 p.m. Eastern.