Your Guide To All The Upcoming Superhero Movies 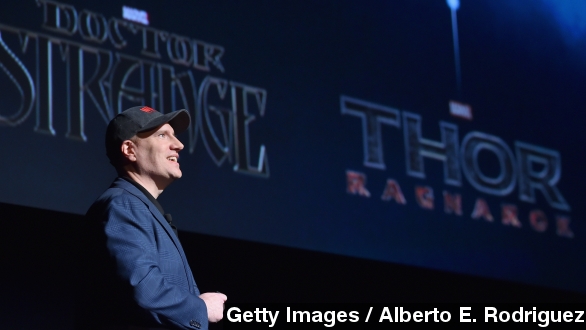 SMS
Your Guide To All The Upcoming Superhero Movies
By Ben Lawson
By Ben Lawson
November 14, 2014
This is our breakdown of all the latest superhero movie announcements before the news passes you by — like a speeding bullet.
SHOW TRANSCRIPT

Recent weeks have put us in what we’re calling a “Superhero Head Spin.” So much superhero movie news, it’s hard to keep everything straight. We’ve put this breakdown together so you can catch up on it all, and be fully prepped for geek-out conversations.

We will start with the reigning box office champs, Marvel. They announced their entire movie schedule through 2019 and it’s ambitious, to say the least. Two Avengers movies in addition to the one set for May 1, 2015, and a date for the sequel to summer blockbuster “Guardians of the Galaxy.”

But most notably, Marvel Studios President Kevin Feige revealed that a black superhero and a female superheroine will get standalone movies. Something the studio had been noticeably lacking.

Chadwick Boseman, who played Jackie Robinson in “42," has signed on to play the Black Panther in a solo movie in Nov. 2017.

Not much is known about that movie but in the comics the Black Panther is the super-powered ruler of a fictional African nation.

And, before Boseman can get his own movie, he'll be appearing in the third Cap movie, “Captain America: Civil War” ...

That film is looking like it might as well be another Avengers movie considering Robert Downey Jr., A.K.A. Iron Man, is said to play a big part in the film. Also, given the comic the movie is based on pits superhero against superhero ... it’s likely we will see some others in the mix as well.

And that female superhero Captain Marvel movie is coming in 2018. No star named for it yet.

However, we do have some confirmed casting for the upcoming “Doctor Strange” film. Benedict Cumberbatch will be playing the Sorcerer Supreme in 2016.

Let’s recap — three new characters confirmed to be getting their own solo movies. Then, we’ve got two other new superheroes, Quicksilver and Scarlet Witch, making their “Avengers: Age of Ultron” debut this May. This will basically double the size of the original Avengers team, leading some to speculate the original crew could be phased out and the newbies will take over.

It’s well known that the next film from that studio will be “Batman v. Superman: Dawn of Justice,” which releases March 25, 2016.

And you can just forget about Christian Bale and Christopher Nolan’s awesome trilogy, apparently.

This Batman takes the form of Ben Affleck and Affleck has said his take on the caped crusader will be an “older, wiser” hero than the Batman movie audiences are used to.

We will also get our first look at Gal Gadot as Wonder Woman in the film. She's getting her own standalone film before the planned Justice League movie in 2017.

And lots of announcements of new superheroes, all being built together for Justice League movies.

Ezra Miller will play the The Flash in 2018. Also that year, Jason Momoa will take on the mantle of Aquaman and Ray Fisher is signed on to play Cyborg in 2020. Shazam and Green Lantern movies are also slated but even less is known about those films. (Video via ABC, Jimmy Kimmel Live, New York Theatre Worskhop)

Except we do know this Green Lantern film will have nothing to do with the Ryan Reynolds one from 2011, which is probably best for everyone.

The only film on DC’s slate that fans likely didn’t expect to see is 2016’s “Suicide Squad,” which will closely follow “Batman v. Superman.”

The Suicide Squad, which also appeared in an episode of CW's "Arrow," are a group of super villains given dangerous missions by the government in exchange for commuted prison sentences.

It’s a long running title for DC but not a particularly well-known one. Which is why the star power Warner Bros. is willing to bring to the film is a bit unexpected.

Reports have circulated that Jesse Eisenberg might reprise his role from Batman vs. Superman as Lex Luthor.

Even more interesting — Jared Leto is rumored for the role of Batman’s most famous enemy, The Joker.

Plus it’s been rumored producers have been courting Will Smith and Tom Hardy for the picture as well.

Catch all that? Yeah, that’s a whole lot of capes and spandex. And basically, your theatergoing life is set for the next six years.