Your Brain Is A Decoding Machine; Give This Message A Try 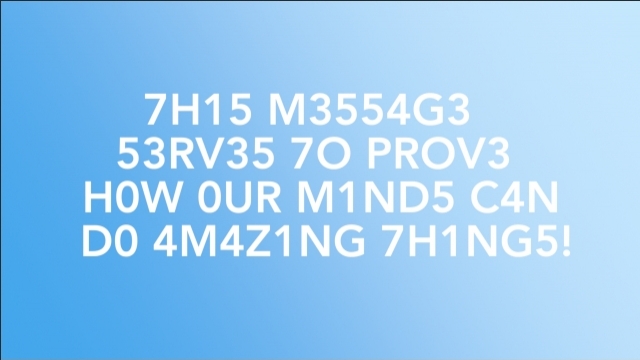 SMS
Your Brain Is A Decoding Machine; Give This Message A Try
By Ryan Biek
By Ryan Biek
February 8, 2016
Your brain can unscramble this message in milliseconds.
SHOW TRANSCRIPT

Give this message a look and see if you can read it. A little hard, but not impossible, right?

A Spanish cognitive scientist told Business Insider the message doesn't activate the parts of your brain that analyze numbers. Instead, your brain treats the digits like poorly written letters, allowing you to decode in milliseconds.

The exercise mimics an alphabet known as "leetspeak" that many used in the Internet's infancy to avoid detection by search engines.

Now you might have noticed some patterns, like 7s being used as T's and 3s as E's. But our brains can do more than just read an altered alphabet.

Psychologists have long known of a phenomenon in which your brain can decode jumbled words as long as the first and last letters are in their proper places. Give this message a try.

Researchers around the world have used exercises similar to the two we showed to study reading and its disorders, such as dyslexia.