Young UK Voters Got The Short End Of The Brexit Stick 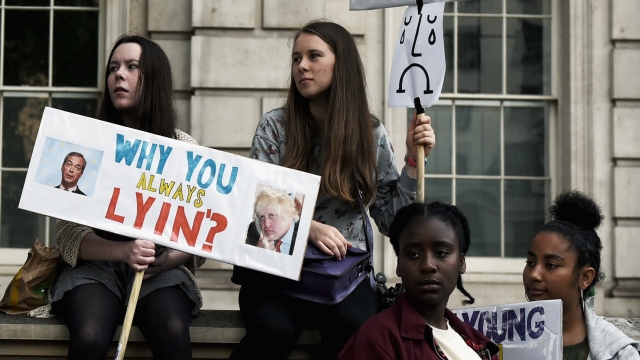 SMS
Young UK Voters Got The Short End Of The Brexit Stick
By Matt Picht
By Matt Picht
June 24, 2016
Almost three-fourths of young voters wanted to stay in the European Union, but they were outvoted by the older generation.
SHOW TRANSCRIPT

The U.K. voted to leave the European Union by a pretty close margin — 52 percent to 48 percent. But the results were less even when split along demographic lines.

The referendum has left young voters with the biggest hangover: Around 73 percent of 18- to 24-year-olds voted to remain in the bloc. Older voters were more likely to favor a Brexit: 60 percent of voters over 65 years old wanted to leave the EU.

The large age gap has led the country's youth to accuse the older generation of selling out their futures by cutting them off from the benefits of EU membership.

One person told The Guardian: "We are Europeans. We are citizens of the world. We didn't vote to leave Europe, but you're snatching it away from us."

Voter turnout is partly responsible for the result. Areas with higher percentages of older voters saw more people voting. The Telegraph notes the three British regions that voted to stay in the EU had some of the lowest turnout.

And education and class also played a big factor in determining the vote. Middle- and upper-class voters as well as voters with a college degree wanted to stay in the EU, while people with secondary education or lower supported a Brexit.

This video includes images from Getty Images and clips from 10 Downing Street and Channel 4.