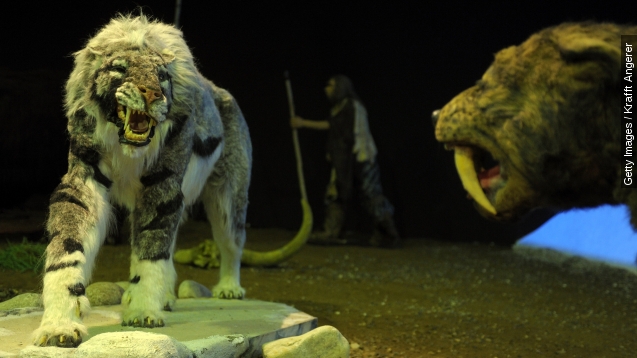 SMS
Young Saber-Toothed Cats Relied On Parents While Teeth Grew
By Cliff Judy
By Cliff Judy
July 2, 2015
What those ferocious ancestors of our big cats may have really needed in their young lives before their huge teeth developed ... was mommy.
SHOW TRANSCRIPT

There's something you may not know about those fearsome prehistoric predators with the two very distinctive facial features.

Saber-toothed cats have drawn fascination for how they lived and hunted prey, inspired cheesy PR stunts from museums and somehow even made their way into the hearts of children. (Video via BBC, La Brea Tar Pits and Museum and 20th Century Fox / "Ice Age")

But it turns out what those ferocious ancestors of our big cats really needed in their young lives was mommy.

In a study published this week, researchers looked into just how long it takes for those massive canine teeth to develop.

Researchers examined the various colors of enamel in fossils to determine how far along each animal was in its tooth development.

While they found the massive teeth had typically begun growing not long after the cats turned a year old, the teeth didn't finish growing until they were 3.

The study says that could have meant saber-toothed cats were especially reliant on parental support for hunting and protection until their teeth fully developed. (Video via BBC)

Previous studies had indicated for all the impressive teeth features, the cats actually had a fairly weak bite and were much more reliant on their powerful body to wrestle and overpower prey.

Reliant on that and, we now know, their mothers.

This video includes images from Getty Images and 2015 Wysocki et al / CC BY 4.0.