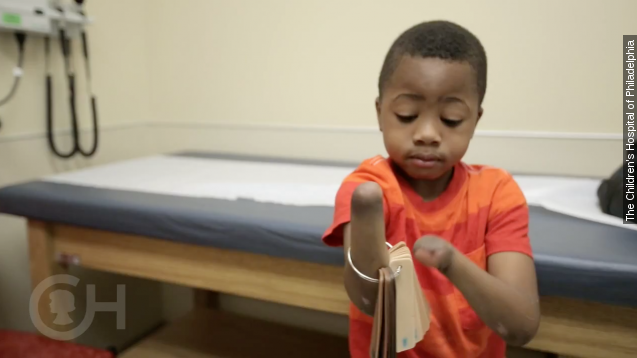 Surgeons at the Children's Hospital of Philadelphia, or CHOP, announced they have successfully completed the world's first bilateral hand transplant on a child.

"When I was two, I had to get my hands cut off, because I was sick. I don't know what a child's hand looks like," said Zion Harvey.

Eight-year-old Zion Harvey lost both his hands and feet to a serious infection when he was just two years old. Earlier this month, doctors from Penn Medicine joined the CHOP team in a 10-hour surgical transplant of two hands for Zion. (Video via The Children's Hospital of Philadelphia)

The surgery, though completed early in July, was just announced Tuesday. L. Scott Levin, CHOP's director of the Hand Transplantation Program, said the surgeons took what they learned from the first bilateral hand transplant on an adult in 2011 and adapted that knowledge for Zion's surgery.

According to The Baltimore Sun, Zion's family was looking for prosthetics for the eight-year-old when they were introduced to Dr. Levin. The outlet quotes Zion's mom who said, "We came for prosthetics and the next thing we knew we were getting hands."

And things are looking up for the little guy. Doctors say he'll spend a few more weeks in rehabilitation before he'll be discharged. Starting with monthly checkups at first, Zion will eventually only need to be seen by a doctor annually.

Zion told NBC he's looking forward to having fun with his little sister.

"Pick up my little sister from daycare, and wait for her to run into my hands and I pick her up and spin her around," he said.

And doctors are hoping they can use what they've learned in Zion's transplant for future surgeries.