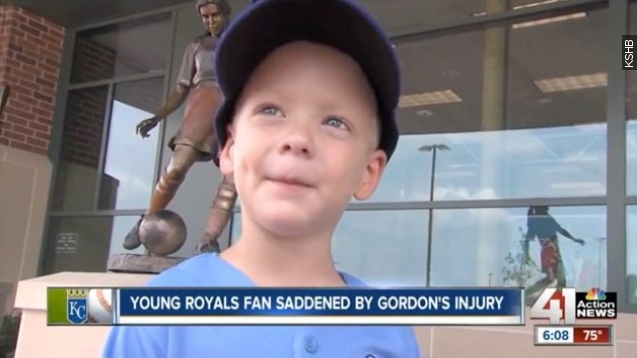 "He was just so broken-hearted," Kelly Latendresse told KSHB.

That was Kelly Latendresse talking to Newsy's partners at KSHB about her 3-year-old son, Kellan, who is one of the Kansas City Royals' youngest fans.

She posted a video of Kellan's reaction to the news that star player Alex Gordon was injured in Wednesday's night's game against the Tampa Bay Rays to her Twitter account earlier this week.

"Why? What happened?" Kelly says in the video.

"Because Alex scored and got hurt?" Kelly asks.

Gordon has definitely been a star player for the Royals for all of Kellan's life.

He even made it onto the MLB All-Star Team for the third year in a row this year. Unfortunately, the groin injury Gordon suffered Wednesday means he's been forced to pull out of playing in that game on July 14th.

"I had to pull my phone out because I could not believe that he completely understood what was happening," Latendresse told KSHB.

Kellan did have this sweet message for Gordon, though:

"Alex, you're my favorite player. Get better soon," Kellan said.

Gordon is expected to be out of commission for the next eight weeks. Hopefully, Kellan's well wishes will have him healing up in no time.