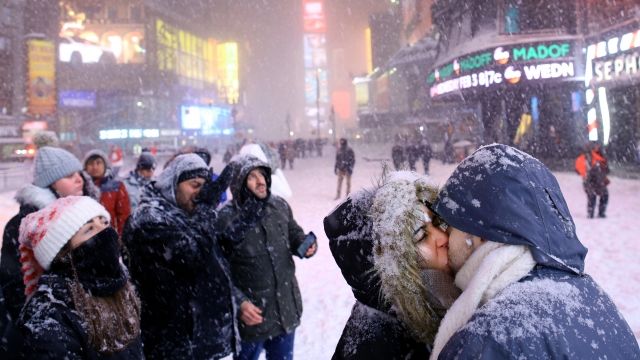 SMS
You Were More Likely To Get A Match On Tinder During #Blizzard2016
By Cody LaGrow
By Cody LaGrow
January 25, 2016
Tinder told Newsy the company facilitated more than 10 million matches during the winter storm that shut down much of the East Coast.
SHOW TRANSCRIPT

Last weekend's blizzard did more than make Times Square a venue for snowmen. It also made us frisky on our phones, too.

It turns out the inclement weather facilitated sunnier outlooks on dating apps.

A Tinder spokesperson told Newsy it saw an increase in app activity over the weekend. More than 10 million matches were made, and at some points, you were 3.3 times more likely to make a match than usual.

Bumble also told us it sees a 20 to 40 percent surge in activity and two times the usual matches during big storms.

And dating app Happn reported that messaging was up 139 percent in New York after Mother Nature hit the city with 27 inches of snow, turning the city that never sleeps into the city that may sleep together.

The same uptick in user activity happened nearly a year ago when another winter storm crippled the Northeast. It's important to remember when the DMs are sliding faster than the snow is falling, blizzard buddies can result in blizzard babies.

Research from Brigham Young University shows that "low-severity" storms can result in more births nine months later. The same professor who conducted the research said last weekend's blizzard could be classified as "low-severity."

I think that means buns are likely in the oven. So congrats to all those expecting. And sorry to those who just ate prepackaged food in flannel alone.