You, Too, Can Live Like Jay Gatsby In This Florida Mansion 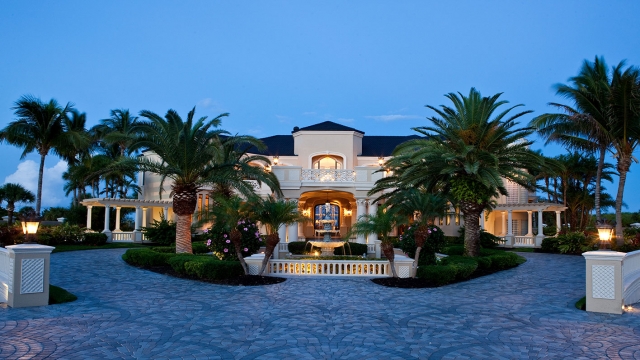 SMS
You, Too, Can Live Like Jay Gatsby In This Florida Mansion
By Katherine Biek
By Katherine Biek
April 28, 2016
The six-bedroom, 10-bathroom home inspired by "The Great Gatsby" is being put up for auction Saturday.
SHOW TRANSCRIPT

A Florida mansion designed to capture the opulence of the mid-1920s is being put up for auction after sitting on the market for nine years.

"Was this all made up entirely from your imagination?" Daisy Buchanan asked in the 2013 film based on the novel.

And the mansion is definitely as over-the-top as the book's namesake character's home was described to be.

The real-life home has its own movie theater, two elevators, a 14-car underground garage and a dining room ceiling covered in gold leaf. Because why not eat in luxury, right?

Besides having its own stretch of private beach, the mansion also sits on five acres of land, which is large enough to have a helicopter land in the backyard.

The property was originally put up for auction in 2007 for a price of $33.5 million, but it didn't sell. Now, TC Palm reports the owner is only asking for about $13 million.

And that discounted price is basically a steal compared to another "Great Gatsby"-esque mansion on the market in Kings Point, New York. The asking price? A mere $100 million.

The Florida mansion goes up for auction Saturday.

This video includes clips and images from DeCaro Auctions.