You Now 'Get' No-Cost Downloads In Apple's App Store 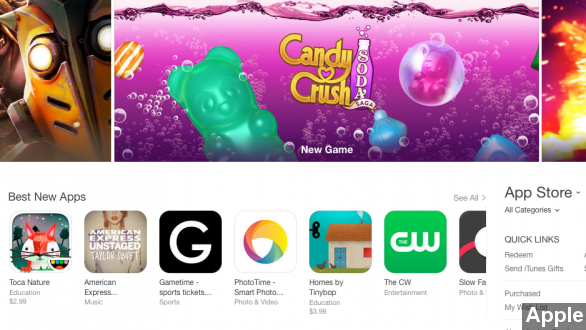 SMS
You Now 'Get' No-Cost Downloads In Apple's App Store
By Evan Thomas
By Evan Thomas
November 20, 2014
Apple has changed its App Store wording from "Free" to "Get," as the European Commission and Federal Trade Commission seek to protect consumers.
SHOW TRANSCRIPT

“Free” downloads are out. Now, in Apple’s App store, you “Get” your no-cost downloads.

The semantic change is thought to be thanks to pressure from European regulators, who maintain “free” doesn’t necessarily convey the true cost of an app. (Video via ABC Australia)

The European Commission’s crackdown started this summer, when it requested both Google and Apple refrain from the potentially misleading moniker.

Apple has now changed its App Store language across the globe, not just in the EU: any apps with no cost to download are available to “Get.” It’s worth noting the change doesn’t appear to have made it to online previews yet.

TechCrunch adds “This was probably easier than making a regional adjustment, and is also a little more truthful about the nature of some of these apps. You can get them, but they may not be free.”

The FTC has extracted millions of dollars in settlement payouts from Apple — and from Google, for that matter, for this very issue.

Amazon, too, is currently in hot water with the FTC, though it’s fighting the charges. The company suggests it’s on consumers to protect themselves and their kids from freemium apps. (Video via CBS)