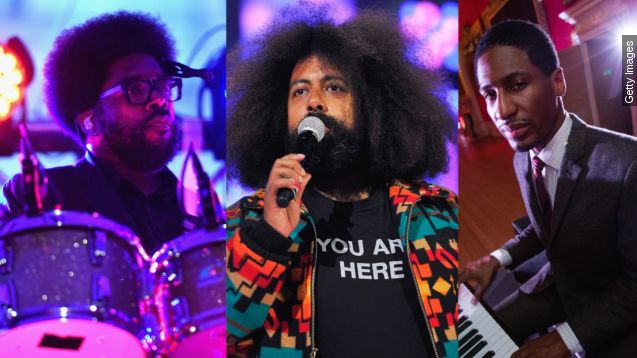 Critics of late night talk shows believe there's a diversity problem. A Mount Everest of thinkpieces was written on that topic after the announcements of new hosts James Corden and Stephen Colbert back in 2014.

This fall, the group of late night talk show hosts might look the same, but at least now, we’ll be listening to something a bit different.

Batiste’s bluesy chops and melodica skills will bring a different kind of sonic flare to the "Late Show" — he tells audiences to prepare for a “love riot.” (Video via NPR)

But his selection also ups the number of late night bandleaders of color who are changing the sound of late-night television.

“Hey, what’s up. We’re The Roots,” Black Thought said. Bandleader Ahmir “Questlove” Thompson has said in various interviews that before Jimmy Fallon took over Late Night, NBC execs weren’t too sure if a Hip Hop band had the range to do, let’s say, music from an English composer. Questlove explained what happened next:

“They'd come and be like, 'You guys got three minutes to come up with an Andrew Lloyd Webber reference.' … Once we did it, then they threw that [out, saying], 'You guys are ours forever,'" Questlove said.

Now, The Roots are arguably the most popular band in late night. Who else could give the Villanova crying piccolo girl a redeeming moment like this, then turn around and recap seasons 1-4 of “Game of Thrones” with a rap. Black Thought: “Eh, King Joffrey was dead and gone soon after saying them wedding vows,Apparently, there was poison involved,Everybody blamed it on Tyrion...”

“Hi, my name is Reggie Watts and I’m the bandleader for the 'Late Late Show,'” Watts said.

It’s a little early in the game to start assessing Reggie Watts’ lasting influence as a bandleader, but he’s already been called the “weirdest guy on late night TV” — and for good reason.

“Will, if you’re in the South of France and you pour yourself a nice glass of wine and a beautiful cat suddenly strokes your leg, and you are surprised, do you think it’s a ghost at first?,” Watts asked.

For Corden’s show, Watts is a bandleader-sidekick, much like David Letterman’s former bandleader Paul Shaffer. Unlike Shaffer, Watts in an accomplished comedian who uses hardware to modulate his voice — when he isn’t riffing on less-popular holidays.

“It’s National Cognac Day!,” Watts sings.  Like Fallon, Corden often uses Watts in skits and steps out of the way, allowing for his bandleader to showcase a sound relatively new to late night.

Corden told Vulture during an interview that Watts has “free range to do whatever he wants” and he didn’t want to put his bandleader in a box because “It would just be such a waste of his talent.”

This brings us back to Batiste. When he appeared on "The Colbert Report" in 2014, he and his band, Stay Human, picked up their instruments, marched through the crowd, and partied in the street New Orleans-style — while still performing. We can assume Batiste will bring that same energy to "The Late Show with Stephen Colbert," which is set to debut in September.