You Can Now Stream One Of Earth's Most Impressive Migrations 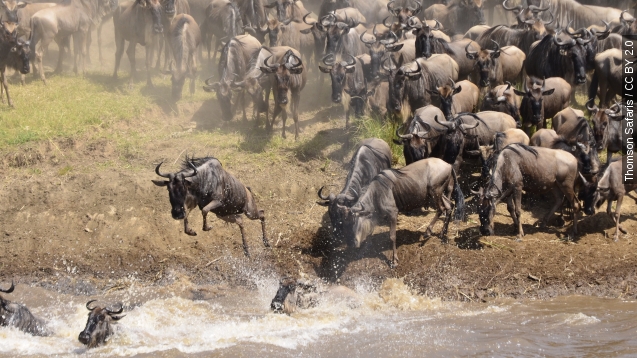 SMS
You Can Now Stream One Of Earth's Most Impressive Migrations
By Evan Thomas
By Evan Thomas
October 1, 2015
The annual wildebeest migration between Tanzania and Kenya will be broadcast live online by Kenya's tourism board.
SHOW TRANSCRIPT

There are a million wildebeests on the move during this seasonal trek, making it one of the largest land migrations on the planet. (Video via YouTube / paultzmay08's channel)

And this year, for those of us who can't get to the Serengeti to see it in person, Kenya's tourism board is trying something new: live streams on YouTube and on Twitter's Periscope video service. Broadcasts will occur twice a day for 20 minutes, with experts who will discuss what we're seeing. (Video via HerdTracker)

The wildebeests move because they need water and phosphorous-rich grasses for grazing. Some 300,000 calves are born along the way. (Video via National Geographic)

The herd has to deal with Nile crocodiles in the Mara River and then one of the largest concentrations of lions in the world when they reach Kenya. (Video via Smithsonian Channel, Jim Griggs / CC BY 3.0)

After all, this migration isn't just about food for the wildebeests — it's an opportunity for the region's predators and scavengers, too. A circle of life, if you will. (Video via Paul Bezem / CC BY 3.0)

Broadcasts will continue through Oct. 5 on Periscope under the #MaraLive hashtag. (Video via HerdTracker)

This video includes images from Thomson Safaris / CC BY 2.0 and music from Frenic / CC BY 3.0.