You Can Buy LeBron's First Dirty, Sticky Cavs Jersey of 2014 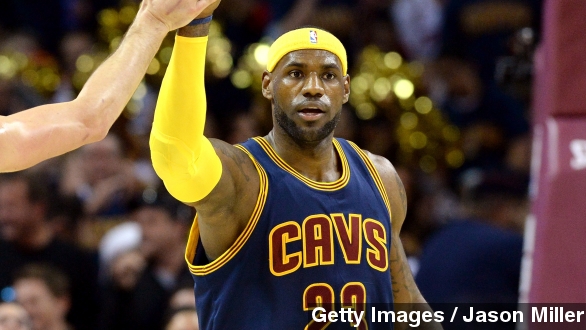 SMS
You Can Buy LeBron's First Dirty, Sticky Cavs Jersey of 2014
By Matt Moreno
By Matt Moreno
November 12, 2014
The NBA is auctioning off LeBron James' Cavaliers jersey from his first game back with the Cleveland.
SHOW TRANSCRIPT

Oh, how far LeBron's Cleveland Cavaliers jersey has come in the past few years.

"The lasting memory of tonight will be this shot — his burning jersey in Lakewood."

Those were images from just four years ago when LeBron James announced he'd be heading from Cleveland to Miami via free agency. (Video via ESPN)

But now he's back in his home state, playing for the Cavs and smoothing things over. Here he is decked out in his 23 jersey on opening night.

And now, here's that jersey posted up for auction.

The NBA is auctioning off the jersey from LeBron's first game back in Cleveland Oct. 30. That game resulted in a five-point loss to the Knicks, but LeBron did finish with 17 points, four assists and five rebounds. And some of the "special" features of the jersey?

I mean, you don't want to wash that thing and lose the magical value of it, right? Maybe LeBron's sweat is still on it!

Which is why one Bleacher Report writer says, "You want LeBresidue? You’ll get LeBresidue — but it will cost you."

But it's got a WHOLE lot of room to make up before it comes close to an article from another NBA great. Yes — we're talking about Jordan.

Michael Jordan's "flu game" shoes sold for a hefty price tag of $100,000 last December. Jordan wore those in the 1997 NBA Finals in a pivotal Game 5 against the Utah Jazz. The Bulls went on to win that game and eventually the championship.

The NBA has not indicated where proceeds for the jersey will go once it's sold.