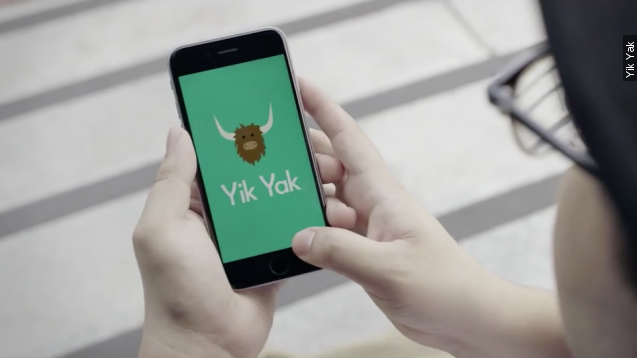 SMS
Yik Yak App Is Still Grappling With Threatening Messages
By Christian Bryant
By Christian Bryant
November 11, 2015
Yik Yak has safeguards to keep people from posting threats on its app, but the service still grapples with handling some of those offensive messages.
SHOW TRANSCRIPT

Anonymous messaging app Yik Yak is getting a lot of attention after authorities in Missouri arrested two men for making terrorist threats directed at University of Missouri-Columbia students.

Authorities arrested Hunter Park, a Missouri University of Science and Technology student, and Connor Stottlemyre, a student at Northwest Missouri State, on Wednesday. Neither Park nor Stottlemyre were arrested in Columbia.

It's not hard to see the appeal of Yik Yak — users are able to say what they want anonymously.

Yik Yak does collect a lot of information from users, including IP addresses and GPS locations when a user posts a message. They've also added filters to prevent users from posting full names and added keywords and flags so that users can identify questionable messages.

But the effectiveness of Yik Yak's safeguards have still been questioned after a number of incidents similar to what happened at Mizzou. Hunter Park was arrested Tuesday nearly 100 miles from where his posts were seen. Several outlets have reported users should only see posts within a few miles of where they are.

Park's alleged post and other threats still slipped through the cracks and caused moments of panic from Mizzou students on social media Tuesday night.

And The New York Times reported back in March, "Schools can block access to Yik Yak on their Wi-Fi networks, but banning a popular social media network is controversial in its own right, arguably tantamount to curtailing freedom of speech."

Yik Yak's co-founder and COO Brooks Buffington released a statement Wednesday saying that while the service is a place for "open and honest conversation," threats made against students — in this case, students of color — went too far.

Buffington provided a link to the service's terms and said Yik Yak works with authorities to investigate threats.

Disclosure: Newsy is affiliated with the University of Missouri.