Yes, These Are Huge Dinosaur Tracks In Scotland; No, It's Not Nessie 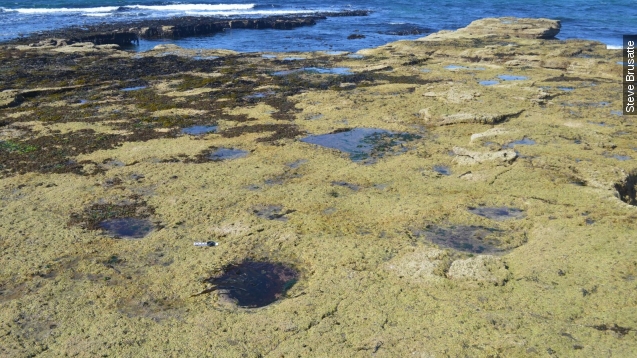 This is paleontologist Steve Brusatte.

He stumbled across dinosaur tracks while on a site on the Scottish Isle of Skye.

Brusatte described the discovery: "We were walking back, and we saw this big depression in the rock that kind of looked like a pothole. And then we saw another one and another one and another one in this zigzag kind of sequence, and it dawned on us ... these are footprints and hand prints left by this biggest dinosaurs of all, these long-necked potbellied sauropod dinosaurs." (Video via Discovery)

Before you ask, no, it's not Nessie. (Video via National Geographic)

"People maybe make that Nessie connection, as they often do whenever there's any kind of fossil found in Scotland," Brusatte said.

But the tracks are a big deal when it comes to real dinosaurs.

"What's really important about it is that these dinosaur footprints and trackways, they're from the middle part of the Jurassic period, about 170 million years ago, and that's a time when there are very few dinosaur fossils from anywhere around the world," Brusatte explained.

And they could, once again, change the mainstream scientific image of sauropod dinosaurs.

Brusatte said, "We started seeing dinosaurs as these animals that only lived on land, but this track site in Scotland, as well as some others that have been found in other parts of the world over the last decade or so, show us that these huge dinosaurs did often live near the water, sometimes even went out into the water."

The discovery opens the door to a lot more research.

"The dinosaurs of Scotland are still really poorly known, and it was only about three decades ago that the first dinosaur fossil was found here. ... So we're really just scratching the surface," Brusatte said.