Yes, Leonard Fournette Can Sell His Jersey For Flood Victims 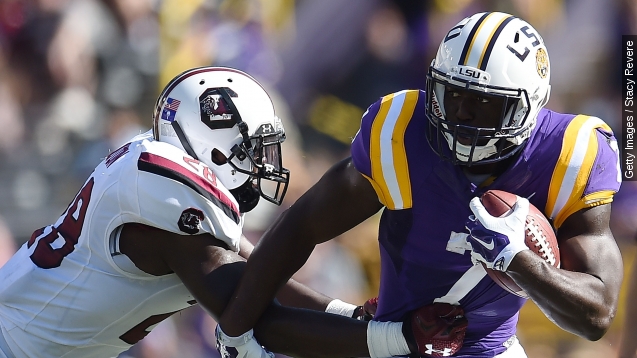 Instead of hyping up his athletic skill in a post-game interview, LSU running back Leonard Fournette offered to auction off his jersey to help with flood relief efforts in South Carolina.

In part, he said, "I want to send my prayers, condolences and empathy to the people of South Carolina. What they are going through reminds me of what we went through... 10 years ago."

The gesture rounded out a day of generosity from the Tigers. The flooding had already moved the game to Baton Rouge and LSU seemed to do whatever it could to make sure the Gamecocks felt like they were playing on their home turf.

Well the excitement about the upcoming jersey auction was short-lived as different news outlets reported Fournette said the NCAA wouldn't allow him to do it because it would be a "violation."

Except, the NCAA quickly tweeted out that Fournette could indeed auction his jersey to help out South Carolina.

But it could be easy to see why so many news outlets and Tweeters were confused. You can blame the O'Bannon case.

Former UCLA basketball player Ed O'Bannon led a class-action lawsuit against the NCAA, challenging the organization's ability to profit off of his likeness. The case highlighted the amount of control the NCAA and member institutions have over a student-athlete's likeness. (Video via ORA TV)

But the organization does have rules allowing college athletes to use their likeness for charitable causes — which would likely cover Fournette's jersey auction.