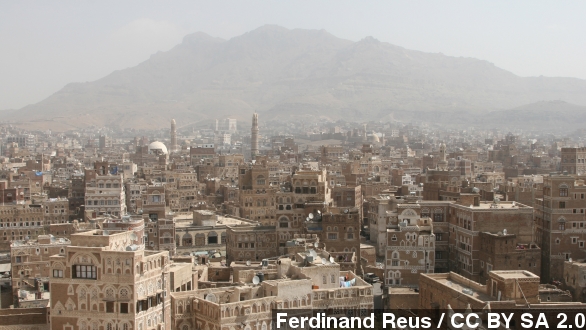 Yemen, the country where Al-Qaeda in the Arabian Peninsula is based, is facing further instability. Rebels reportedly surrounded the home of the country's prime minister Monday in what the Yemeni government is calling an attempted coup.

After days of fighting and confusion in the country's capital city, Sanaa, government forces and the country's Houthi rebel group signed a tenuous ceasefire Monday. Yemen's information minister says the rebels have seized state-run media buildings, surrounded the prime minister in his home and plunged Sanaa into chaos.

The violence re-erupted after rebels abducted the Prime Minister's chief of staff in order to disrupt a meeting on the country's draft constitution, which the Houthis oppose.

The government and the rebels have been locked in a U.N.-brokered standoff since September, when Hauthi fighters seized large parts of the city. Both sides have accused the other of violating the deal.

The Guardian's Ian Black writes this latest round of violence wasn't anticipated by observers. "The expectation was that [the Houthis] would use their improved military position to bargain with the government to obtain greater political and economic rights."

CNN's Nick Paton Walsh says the surge in fighting will undermine the Yemeni government's ability to combat terrorist organizations at home — like Al-Qaeda in the Arabian Peninsula, which is back in the spotlight after taking credit for orchestrating the recent terrorist attacks in France.

Walsh said, "The more chaotic it gets, the harder it is for Yemeni intelligence to track down Al-Qaeda targets and help American drones. ... All the chaos here in Sanaa benefits Al-Qaeda in the Arabian Peninsula, and that's the real concern."

According to Yemen's information minister, the government is negotiating with the rebels for the release of the abducted chief of staff.