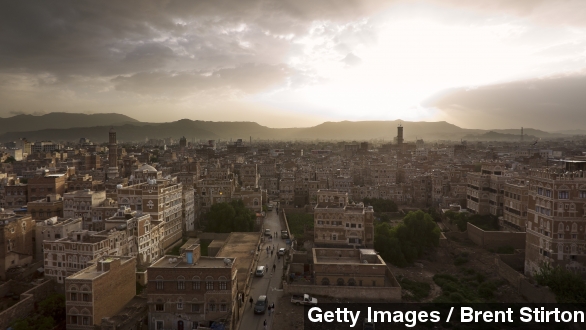 Weeks after forcing the country's president and cabinet to step down, Yemen's Houthi rebel group has officially seized control of the government.

In a televised statement broadcast Friday, the rebels announced they had dissolved the country's parliament and would select a transitional council to form a new government.

The announcement comes after U.N.-orchestrated negotiations between Yemen's political factions failed to meet the Houthi's deadline to agree on a political roadmap for Yemen.

The Houthis, who are Shiite Muslims, have secured support from several political factions, and are portraying their latest move as a representative consensus.

But the group's opponents, including many Sunni leaders in the country's southern regions, blasted the new committee as a blatant power grab. The rebel's new government might not be respected in some areas of Yemen, which could lead the country into further instability.

Deputy Spokesperson Marie Harf told reporters, "The unilateral declaration issued today by the Houthis does not meet that standard of a consensus-based solution to Yemen's political crisis."

And the feeling is mutual. The rebels oppose U.S. influence in Yemen, particularly the ongoing drone strikes in the country.

But as The New York Times noted back in January, the Houthis and the U.S. have been united by a common enemy — Al-Qaeda in the Arabian Peninsula. The rebels are also battling the infamous terrorist group, and haven't interfered with U.S. operations against AQAP.

One expert told the Times, "Maybe this is the time we move in to provide them the aid to do more on the ground and let them do it. At the end of the day defeating Al Qaeda has to be done by the people of the Middle East; this Whack-a-Mole approach is not going to work anyway."

The U.S. also has another interest in securing good relations with the new government; The Guardian reported Tuesday the Pentagon has lost control of at least $400 million worth of military hardware sent to the Yemeni army since 2006.