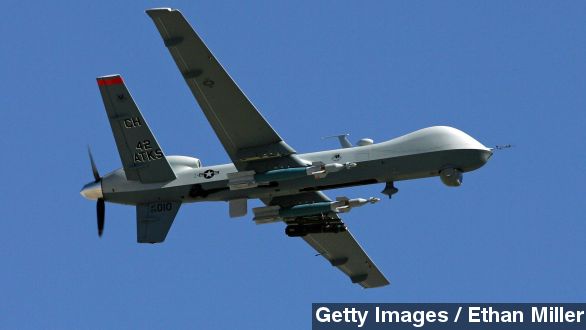 SMS
Yemen's Collapse Threatens U.S. Drone Program
By Steven Sparkman
By Steven Sparkman
January 22, 2015
The U.S.'s program of striking at Al-Qaeda leaders had a friend in President Hadi, but it's unlikely his replacement will be so enthusiastic.
SHOW TRANSCRIPT

The sudden resignation Thursday of Yemen's president, prime minister and cabinet left a country that was already in chaos without anyone clearly in charge.

President Abed Rabbo Mansour Hadi had been a vocal proponent of U.S. drone strikes and was considered an ally by The White House. But after Houthi rebels took over much of the capital this week and laid siege to Hadi's palace, he and just about every other recognizable authority in Yemen stepped down. (Videos via National Dialogue Conference, OTV)

And even though the country's parliament rejected Hadi's resignation, it's not clear how much weight its word carries considering the last parliamentary election was in 2003.

All of this means the U.S. may have unexpectedly lost one of its most important allies in the Middle East, and Pentagon reporters say the government is scrambling to figure out what the move will mean.

CNN's Pentagon correspondent Barbara Starr characterized the situation as, "No clear understanding now at this hour who is in charge in Yemen, who is running the government and what is really happening there."

Fox News's Pentagon reporter Jennifer Griffin said, "All of this is very worrisome to U.S. officials who are seeing a key ally against Al-Qaeda fall to militants that may be under the control of Iran."

For years, the U.S. has carried out a program of targeted drone strikes in Yemen, going after the leaders of the region's most violent Al-Qaeda offshoot.

What will happen to that program now is anyone's guess. State Department spokesperson Jen Psaki said Thursday the situation hasn't changed yet.

"I will say that our top priority in Yemen remains the counterterrorism effort where we've been targeting Al-Qaeda in the Arabian Peninsula for a number of years. That's ongoing."

But CNN's Peter Bergen argues President Hadi was a rare case, and we shouldn't expect the country's next leader to be such an enthusiastic partner.

"The Yemeni president is the first president of any country, I think, to go to the U.N. and say, 'Hey, the American drone program really works.' ... And now he's gone, and whoever replaces him is unlikely to have the same attitude."

The Houthis have claimed not to want to rule the country, only to have greater representation in the government. We'll see whether that's true as they respond to the apparent power vacuum in the coming days.