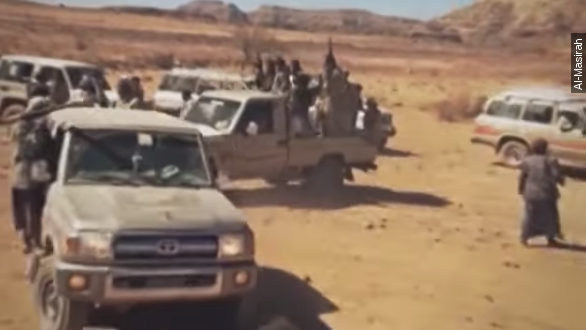 U.S. troops are out of Yemen, but Iran isn't going anywhere. (Video via Al-Masirah)

Yemen's conflict — like so many others in the region — pits the country's Sunnis against its Shiites.

Shiite rebels have already seized the capital of Sanaa and are now advancing to the city of Aden — the stronghold of Yemen's pro-American president Abed Rabbo Mansour Hadi. (Video via Al-Masirah, Embassy of Yemen In D.C.)

It's widely believed these rebels, known as the Houthis, get weapons, funding and training from Iran. Iran denies this. (Video via Middle East Eye)

Either way, the Houthi advance is good news for Iran, which is wrestling for regional dominance.

Alarmed at a prospect of a Shiite-controlled state in its backyard, the Kingdom is now getting involved in Yemen, reportedly moving military equipment to its southern border. (Video via YouTube / Mohammed Abu Salem)

But the Iranian-Saudi rivalry isn't the only proxy war playing out in Yemen. Al-Qaeda in the Arabian Peninsula and ISIS are competing for influence in Yemen's Sunni-dominated south. They're fighting both each other and the Houthis.

The sectarian divide has grown so deep, the U.N. special envoy for Yemen says the country is headed "to the edge of civil war." (Video via YouTube / ali alhomegani)