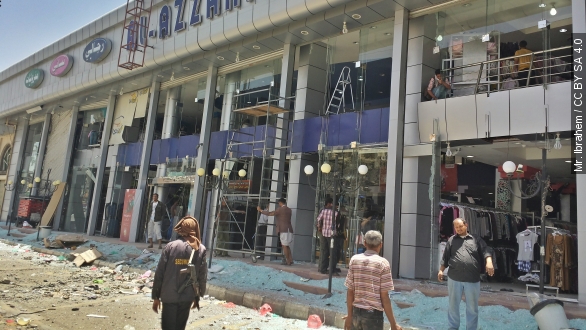 SMS
Yemen Ceasefire Follows Increase In Saudi Airstrikes
By Ben Lawson
By Ben Lawson
May 10, 2015
Yemen's Houthi rebels have agreed to a ceasefire deal orchestrated by Saudi Arabia, which has been conducting airstrikes in the country for months.
SHOW TRANSCRIPT

The proposal comes just as Saudi Arabia begins ramping up military efforts in Yemen. The neighboring nation has been leading a military coalition, supported by the U.S., bent on stopping Yemen's Houthi rebels from seizing power — a group Saudi Arabia believes to be supported by Iran.

On Saturday, Saudi officials announced a fresh round of airstrikes, targeting Houthi strongholds and supply lines. One of those airstrikes hit the home of former Yemen president and prominent Houthi supporter Ali Abdullah Saleh. Saleh was not there at the time.

CNN reports that Saudi officials have admitted to targeting schools and hospitals believed to be storing weapons for Houthi rebels. (Video via RT)

And now those airstrikes are under fire from the United Nations, which said they could be a breach of international humanitarian law. The UN estimates more than 1,400 people have been killed and roughly 6,000 have been injured in the country since mid-March. Half of those people are believed to be civilians. (Video via The Telegraph)

The UN's humanitarian coordinator for Yemen said in a statement, “The impact on civilian infrastructure across Yemen has been devastating. ... Conflict continues to rage across the country, putting men, women and children from all of Yemen's communities at risk.”

That international pressure could be why Saudi Arabia's easing up now, but the country's made it clear it won't tolerate any violations of this latest accord, claiming the Houthis took advantage of the last ceasefire effort to advance into the port city Aden.

Saudi Arabia supports exiled Yemeni President Abd-Rabbuh Mansour Hadi who was ousted by the rebels earlier this year. The Yemeni government is seen as a key U.S. ally in combating Al-Qaeda in the region.