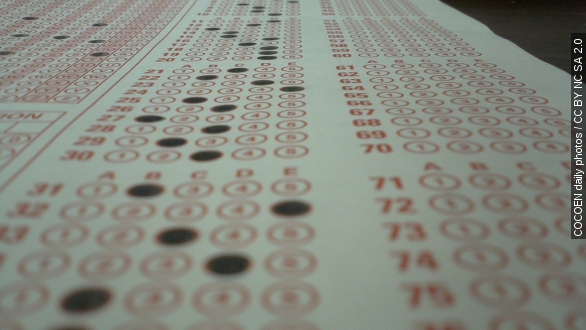 "They have made their bed, and they're going to have to lie in it," Judge Jerry Baxter said.

The scandal stems from allegations made in 2008 that former Atlanta Public Schools superintendent Beverly A. Hall orchestrated a cheating scheme where educators changed the answers to students scoresheets on a statewide exam. (Video via The Atlanta Journal-Constitution)

The Atlanta-Journal Constitution was the first outlet to point out suspicious increases in test scores at certain schools. By the summer of 2009, the state of Georgia had launched its own investigation.

"At one school, investigators say the principal and his teachers held after school parties where they sat around and corrected tests before turning them in to be graded," ABC reporter Steve Osunsami said.

The return for educators: they received praise and even bonuses when their students scored well. The catch: students were promoted to their next grades without being prepared to succeed.

Twenty-one other educators pleded guilty to lesser charges before Wednesday's verdict. Of the 12 charged, only one was acquitted.

"Anybody who looked at it felt like she shouldn't have been here. ... From the outset, her kids didn't pass the test," said Sandford Wallack, Curb's attorney.

As for Hall, the so-called mastermind in the cheating scandal, she died of breast cancer in March with her legacy as an educator tarnished and criminal allegations unresolved. (Video via WGCL)

"We'll just have to live with that. We'll never know, as Atlantans, the whole story of what happened. And that's a shame not to know that," Atlanta Journal-Constitution Editor Kevin Riley said.

The 11 defendants convicted could face up to 20 years in prison for the most serious charges. Their sentencing is next week.

This video includes an image from COCOEN daily photos / CC BY NC SA 2.0.