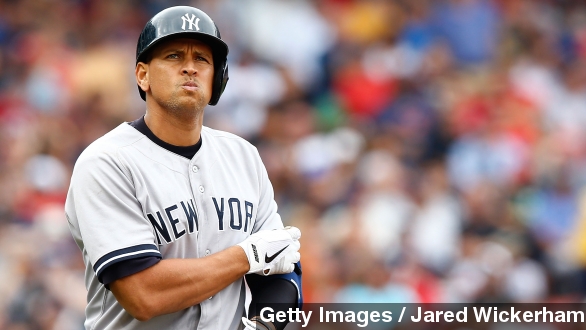 The battle between Alex Rodriguez and the Yankees organization continues. New York Daily News reports the organization is now looking to strip one of baseball's richest players of bonuses he could earn by reaching historic MLB milestones.

At 654 home runs, A-Rod is just six away from tying Willie Mays for fourth all-time in the MLB's career home runs. He's 60 away from Babe Ruth, 101 from Hank Aaron and 108 away from Barry Bonds.

A-Rod's contract calls for a $6 million bonus each time he passes one of those milestones. The contract, though, is more of a publicity marketing deal and is separate from his playing contract.

But the Yankees don't want to hand over the money and plan on fighting the bonus payouts. The organization is saying Rodriguez signed that 2007 contract "under false pretenses," according to New York Daily News.

Those "false pretenses" presumably being that Rodriguez said he wasn't cheating. A-Rod was suspended by Major League Baseball for part of 2013 and all of 2014 for using performance-enhancing substances. He lost out on about $25 million from his contract due to the suspension. (Video via CNN)

If 39-year-old Rodriguez does hope to surpass these milestones in a Yankees jersey, he'll likely be doing so from the designated hitter position.

The team re-signed third baseman Chase Headley last year and reportedly plans on him being their everyday starter.

Rodriguez at least seems to be off to a good start with new MLB commissioner Rob Manfred, who took over for former commissioner Bud Selig Monday.

"We've spoken on a number of occasions, and it has been a positive dialogue," Manfred said in an interview with ESPN.

This New York Post story says the two met as recently as the last week or so, and "in an attempted signal of goodwill, A-Rod came unaccompanied by any Players Association representatives or personal attorneys."

A-Rod has three years and more than $60 million remaining on his playing deal with the Yankees.

This video includes images from Getty Images and Baseball Digest.