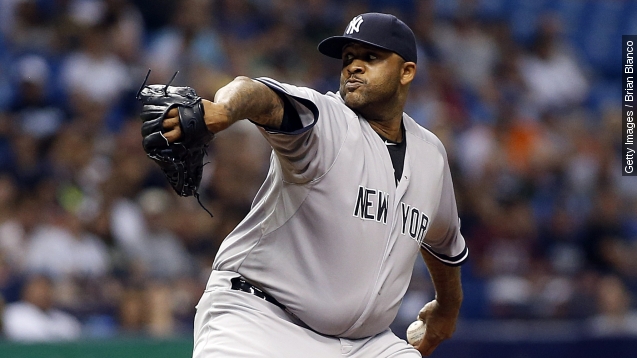 SMS
Yankees' CC Sabathia Checks Into Alcohol Rehab
By Matt Moreno
By Matt Moreno
October 5, 2015
Pitcher CC Sabathia is checking into rehab before the American League wild-card game, which if the Yankees win, would lead to a five-game ALDS.
SHOW TRANSCRIPT

New York Yankees pitcher CC Sabathia is entering rehab for alcohol, according to the team.

A statement from Sabathia read, in part: "Today I am checking myself into an alcohol rehabilitation center to receive the professional care and assistance needed to treat my disease. ... I am looking forward to being out on the field with my team next season playing the game that brings me so much happiness."

The timing of the voluntary rehab check-in is especially challenging as the Yankees get set for the American League wild-card game, which if they win, would propel them into a five-game AL Division Series. Sabathia likely would've started a game or two in that series.

In August, a TMZ cameraman caught Sabathia getting into a fight outside of a Toronto-area night club. The Yankees never disciplined Sabathia, but it was bad press during an already subpar season.

Outside of that incident, and perhaps a natural decline in production, Sabathia's apparent struggles with alcohol have been relatively unknown to the general public until now.

This is Sabathia's seventh year with the Yankees and his 15th in the majors. He has two years remaining on his contract.