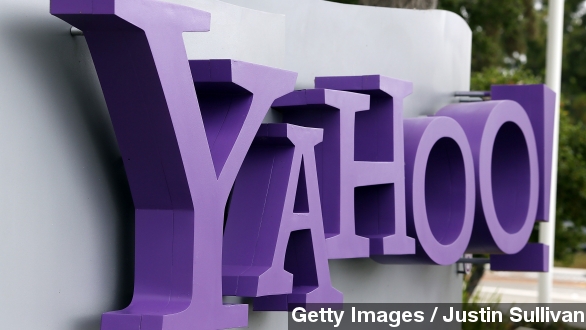 SMS
Yahoo (Barely) Cuts Into Google's U.S. Search Share
By Danny Matteson
By Danny Matteson
January 8, 2015
According to a new report, Google's share of searches in 2014 dropped by a little more than 4 percent while Yahoo gained at the same time.
SHOW TRANSCRIPT

In the world of search engines, it's "all hail King Google" — but it seems the king's crown may have slipped a little in 2014.

OK, not by much, but according to a new report from analytics firm StatCounter, Google's share of searches between December 2013 and December 2014 dropped by a little more than 4 percent — from 79.3 percent of all searches to 75.2 percent in the U.S.

It doesn't sound like a lot, but according to Bloomberg, it's the lowest Google's share of the market has been since 2008, when StatCounter initially started its tracking.

Simultaneously, Yahoo's share of the action jumped exactly 3 percent — from 7.4 to 10.4 percent over the same time period.

So why exactly is Yahoo trending and Google ever so slightly declining?

Well, according to many, it likely has to do with Mozilla browser Firefox.

In November of 2014, Yahoo and Mozilla struck a deal to make Yahoo the browser's default search engine — replacing Google.

And with Firefox holding about 12 percent of the desktop browser market share — according to Internet-tracking firm Net Market Share — you can see how that might make a dent.

StatCounter's CEO notes: "The move by Mozilla has had a definite impact on US search. The question now is whether Firefox users switch back to Google."

Whether they switch back or not, Google could be facing more search woes in the future as well, according to reports.

As The Wall Street Journal writes, Apple might be considering dropping Google as the default search engine on its devices as the two companies' "rivalry intensifies."

While Google and Yahoo placed first and third in U.S. search share respectively, Bing also made a showing, coming in second at 12.5 percent.

This video includes images from Getty Image and music from Pierlo / CC BY 3.0.