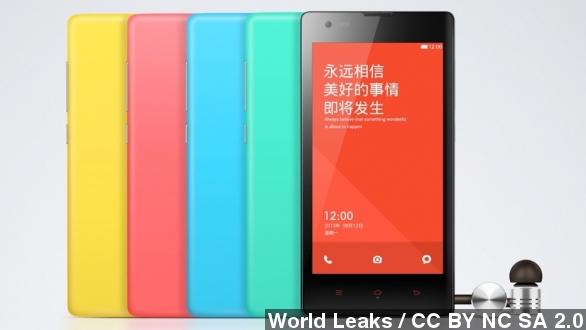 One of the world's largest smartphone makers is a company many westerners have likely never heard of: Xiaomi.

Last year, Xiaomi sold 61 million phones, more than twice as many as it did the year before.

Which makes the Chinese company, valued at $45 billion, the third largest smartphone maker worldwide behind Samsung and Apple.

And the company doesn't just make smartphones. It has a line of tablets TVs, set-top boxes and — weirdly enough — air purifiers.

Xiaomi raked in an impressive $12.1 billion in pre-tax sales last year alone, more than double what it made in 2013.

But there's a good reason many in the West haven't heard of Xiaomi: the company isn't selling products in the U.S., United Kingdom or Australia. Not yet, at least.

But it's booming in its home market of China — the biggest cellphone market in the world. And it recently broke into India, the world's No. 2 market.

The company's appeal comes from affordable prices and a customized Android operating system with features that at least rival the high-end models. (Video via Android Authority)

But comparisons to other smartphone makers haven't always been favorable for Xiaomi.

The company is often called the "Apple of China," not only because it's a tech giant but because it's faced accusations of copying Apple's design.

Including from Apple designer Jony Ive, who said, "It is theft and it is lazy," according to TechCrunch.

And simply looking at the two companies' comparable products, it's hard not to see similarities.

In response, Xiaomi's global vice president has told The Verge the accusations were "sensational" and, "If you have two similarly skilled designers, it makes sense that they would reach the same conclusion."

Another tech company, Ericsson, recently sued Xiaomi for patent infringement, leading India to temporarily ban sales of Xiaomi's devices, although the company succeeded in getting the ban lifted.

For now, bad Western press probably doesn't bother Xiaomi. After all, westerners aren't their customers. But if that changes, the Chinese tech giant will have some PR work to do.