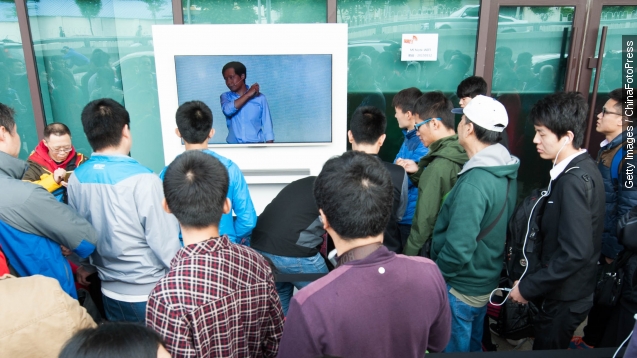 Apple will have another competitor to stave off in the global smartphone market — but not quite yet.

Xiaomi, the Chinese startup vying to become a global smartphone heavyweight, opened its first online stores in the U.S. and Europe. The U.S. site went online 10 p.m. Eastern time Monday, and the site for the U.K., France and Germany went up Tuesday afternoon.

Xiaomi called the sites a "beta test sale," designed to test the market for its smartphone accessories before internationally launching their actual phones. On Tuesday morning, all four available products sold out in the U.S.

Although they're all out of stock, the online store still offers the four products: $80 headphones, two different portable power banks and the cheap-but-popular fitness tracker, the Mi Band.

Xiaomi trails only Apple in its home country, and it's not by much: Xiaomi commands 13.7 percent of the market share compared to Apple's 14.7 percent. Xiaomi's phones are especially popular among China's young adults, which bodes well for the company's future.

In December, Xiaomi was valued at $46 billion, making it the world's most valuable privately funded tech startup and lending some weight to Xiaomi's ambitions to overtake Apple and Samsung.

But there's a glaring weakness that could derail the whole thing: intellectual property infringement. The company's struggled with patent issues in China, particularly in its video streaming services.

Others, including Apple head designer Jony Ive, have cast Xiaomi as a habitual copycat. Here's Ive discussing Xiaomi at a Vanity Fair summit:

"I think it's very straightforward, and it really is theft and it's lazy, and I don't think it's okay at all."

It's hard to discount the similarities. Xiaomi even mimicked some parts of Apple's keynote addresses for a new product launch.

Xiaomi defends that it's independently brilliant — and it'll have to be, if it wants to enter the global smartphone market. Intellectual property issues led India to ban Xiaomi products last December, although the ban was partially lifted a couple weeks later. For now, the phones aren't available in the U.S.