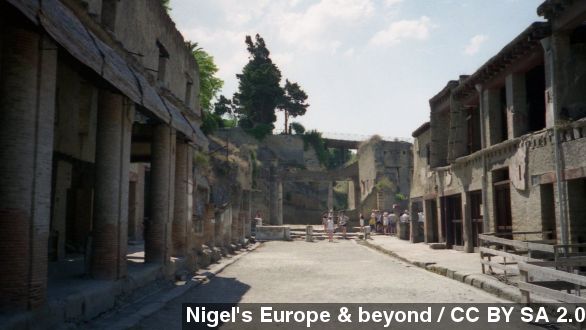 Scientists are close to solving a puzzle more than 1,000 years old: how to read ancient scrolls carbonized by an ancient volcano.

The scrolls are from Herculaneum, a Roman city that was destroyed by the same eruption of the volcano Vesuvius that destroyed Pompeii. (Video via BBC)

Super hot gases from the volcano sucked all the water out of the scrolls, leaving them blackened tubes. It was difficult for historians to unravel them without completely destroying them in the process — only some 200 of the rolls have been unrolled, translated and published. (Video via YouTube / Ryan Baumann)

But now, through X-ray imaging, scientists have been able to not only virtually unravel the scrolls, but also identify the ink on the inside of the scrolls, which means they could be on their way to reading them. (Video via Emmanuel Brun / Vito Mocella)

But this imaging technique isn't without its drawbacks.

University of Kentucky Computer Science professor Dr. Brent Seales explained, "The sizes of the images, and the size therefore of the average data set, is huge ... so we're talking about a single scroll being represented by a data set that can be terabytes large, so it's not that easy to be able to handle all the data."

If one scroll translates to terabytes of data — hundreds of thousands gigabytes — deciphering the close to 2,000 scrolls taken from the site at Herculaneum could represent a huge data management challenge. (Video via Emmanuel Brun / Vito Mocella)

Herculaneum has long been something of an archeological treasure because so much of the site was perfectly preserved by the volcano's super hot gases. Many of its buildings and artifacts are still largely intact. (Video via The Guardian)

The scrolls come from the library of a large villa in Herculaneum, and historians hope to discover previously unknown or lost works of Roman and Greek literature among them.

This video includes an image from Nigel's Europe & beyond / CC BY SA 2.0.