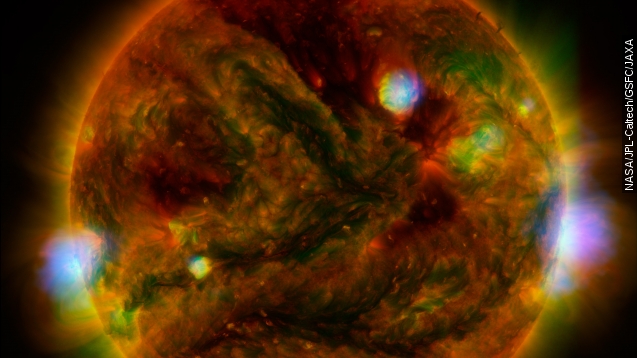 Typically, you shouldn't point telescopes at the sun — you could go blind. But NASA makes an exception with its Nuclear Spectroscopic Telescope Array, or NuSTAR.

NuSTAR, launched in 2012, is an orbiting X-ray observatory originally designed to track distant supernovas and black holes. (Video via NASA)

But it can also collect X-ray images of our own sun in unprecedented detail. When its data is combined with readings from the ultraviolet Solar Dynamics Observatory, you get this: (Video via NASA)

A sort of heat map of the sun. Its surface measures millions of degrees Fahrenheit, but it’s not evenly heated throughout.

NuSTAR has spotted even hotter spots, which researchers say are the work of microflares.

These are like solar flares, but on a much smaller scale. They don’t launch explosions of energy and matter away from the Sun, but they are thought to make parts of the corona — the Sun’s atmosphere, basically — hot enough to stand out in the X-ray spectrum. (Video via NASA)

And they’re not well-understood, yet. Researchers plan to use NuSTAR’s cameras to study these tiny flares in more detail, and hunt for evidence of even smaller bursts called nanoflares. (Video via NASA)

They’ve presented their findings so far at this week’s National Astronomy Meeting in Wales.

This video includes images from NASA and music from Matt Lloyd / CC BY 3.0.