WWII's 'Agent Fifi' Test And The History Of Female Spies 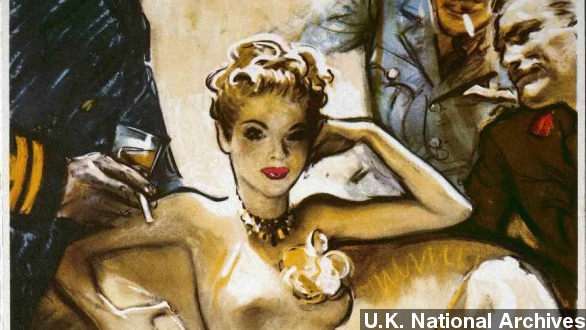 SMS
WWII's 'Agent Fifi' Test And The History Of Female Spies
By Daniel Shapiro
By Daniel Shapiro
September 17, 2014
The U.K. National Archives has released details about Marie Chilver, aka Agent Fifi. She was one of many important women spies during World War II.
SHOW TRANSCRIPT

Sometimes legends turn out to be more fact than fiction. That's exactly what happened in the case of legendary femme fatale Agent Fifi.

On Wednesday the U.K.'s National Archives confirmed that Agent Fifi was real and that her name was Marie Christine Chilver. The British secret intelligence, or Special Operations Executive, would send spies in training on test missions during World War II. It was then that Chilver would come into play.

The National Archives writes in a blog post: "Fifi was sprung on the students by surprise. Expecting to meet some contact during their schemes, students were instead met by a stunning blonde — apparently, a French freelance journalist named 'Christine Collard' — offering them help."

Chilver would then use her intelligence, judgment of character and keen listening skills to extract information some of the trainees. There were rumors she seduced them to accomplish this, although her file doesn't confirm those claims.

Chilver's reports often spelled doom for those students who shared information. If the student revealed too much, he was failed and fired. Eventually word of Chilver's escapades spread through the ranks of students.

Chilver, who died in 2007, wasn't the only famous female spy in World War II. History is full of stories of legendary female operatives from the era, so let's take a look at some of the more famous ones.

There was Josephine Baker, an American dancer who gained massive popularity in Paris before the war. Baker used this popularity to tour Europe, including Spain and Germany, where she wrote secret messages for the French Resistance in invisible ink on her sheet music. She even smuggled photos of German military installations by pinning them to her underwear.

Violette Szabo was a saboteur for the Special Operations Executive. Szabo's first mission to sabotage German industrial plants was a success, but her second mission went awry.

BBC: "Violette was captured, subjected to torture and interrogated though she gave nothing away. She was eventually sent to Ravensbruck concentration camp, where she was executed with two other female SOE agents.

A video game based on Szabo's exploits and titled "Velvet Assassin" was released in 2009. (Video via GameSpot)

Then there was Nancy Wake. An obituary in The New York Times tells of how Wake escorted downed Allied airmen through Nazi-occupied France to safety in Spain and even killed a German soldier with her bare hands. Her life was made into a number of TV documentaries and was also chronicled in her autobiography "The White Mouse."

Or Virginia Hall, whom the Gestapo called "The Limping Lady." Her face appeared on wanted posters all throughout France. The Gestapo once said of her: "She is the most dangerous of all Allied spies. We must find and destroy her."

Julia Child worked for the Office of Strategic Services, a precursor to the CIA. Child helped develop a shark repellent that was used by the allies and eventually served as Chief of the OSS Registry.

And Hollywood starlet Hedy Lamarr invented a frequency hopping system intended to aid the U.S. Navy's torpedo systems. Lamarr's patent wasn't used until the Cuban Missile Crisis, but as The Guardian points out, it "eventually [became] a constituent part of GPS, Wi-Fi and Bluetooth technology." (Video via MGM)

Perhaps it's tales of these real-life women that have inspired fictional portrayals in cinema, such as Diane Kruger's Bridget von Hammersmark in Quentin Tarantino's film "Inglorious Basterds."