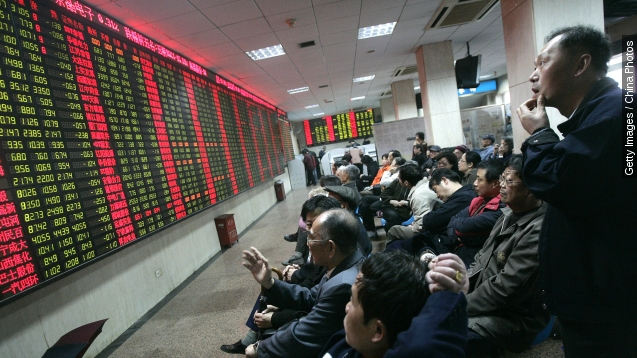 SMS
WSJ, United & NYSE Woes Are Nada Compared To China's Crisis
By Leah Becerra
By Leah Becerra
July 9, 2015
Three major outages happened in one day in the U.S. But on the other side of the globe, China is dealing with a real stock market issue.
SHOW TRANSCRIPT

Three major outages take place in one day in the U.S., and many Americans are doing one of two things: Coming up with conspiracy theories or joking about just restarting the system.

But on the other side of the globe, China is dealing with a real stock market issue. Not only is the issue much more severe, it's also not just a one-day thing.

Wednesday, the Shanghai Composite Index fell 5.9 percent and the Shenzhen Composite Index tumbled 2.5 percent. And companies are being forced to shield their stocks from further collapse by suspending trading.

For a single day, those numbers might not seem terrible, especially compared to some of the U.S.'s steeper drops like in 1987. But look at where China's stocks were just on June 12 and you can see the scope of the problem. (Video via Nightly Business Report)

And not only have China's stocks fallen, all the government's attempts to save the markets have begun to backfire.

"You saw some of the steps they took. ... The danger is that the more they do and it doesn't work overnight, it encourages more panic selling. And that in fact it's going to make people lose confidence in the government's economic management," said PBS NewsHour's Margaret Warner.

Which appears to be the case today as panic has spread outside China's exchanges.

The Wall Street Journal reports, "China’s currency ... fell to a four-month low in offshore markets, while a global selloff in commodities continued, with oil down in early Asian trading and metals such as copper trading close to six-year lows." And now the country's bond market is also beginning to sink.

No one knows how much further China's bubble will collapse, but in the meantime U.S. investors are seeing a silver lining.

"Investors in the U.S. don't have a lot of exposure to markets in China. And the drop in U.S. stocks could spark a buying opportunity," said CNN's Alison Kosik.

That is, as long as you're willing to invest in those few Chinese companies listed on U.S. markets now — while they're low — and hold on tight during the current volatility.

This video includes images from Getty Images and music from Skill_Borrower / CC BY NC SAMPLING+.