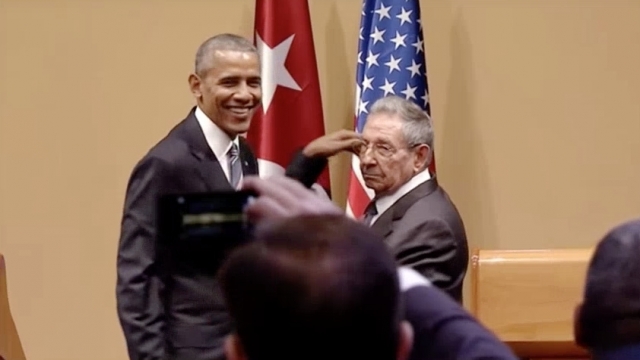 SMS
Wristy Business: An Explanation Of Obama's Awkward Handshake
By Grant Suneson
By Grant Suneson
March 28, 2016
During his visit to Cuba, President Obama had an awkward moment while shaking hands with Raúl Castro. The White House is now explaining what happened.
SHOW TRANSCRIPT

We’ve all had our fair share of awkward moments but probably never one that’s been viewed as much as the one President Barack Obama had in Cuba.

Yikes. That’s not how you’re supposed to shake hands.

Apparently, the handshake-that-wasn’t turned out so poorly the White House felt it needed to weigh in on exactly what went wrong.

"President Castro had in mind a rather iconic photo with President Obama and his arms raised together. I think President Obama believed that that would imply a whole lot more agreement on some priorities than actually exists," Earnest said.

While Obama is attempting to thaw a frosty relationship with Cuba, the U.S. still has some deep ideological differences with the communist nation.

Earnest added the move to grab Obama’s arm was totally unexpected and said that "for an 84-year-old, President Castro still has some pretty quick reflexes."

This video includes clips from USA Today and the White House and images from Getty Images.