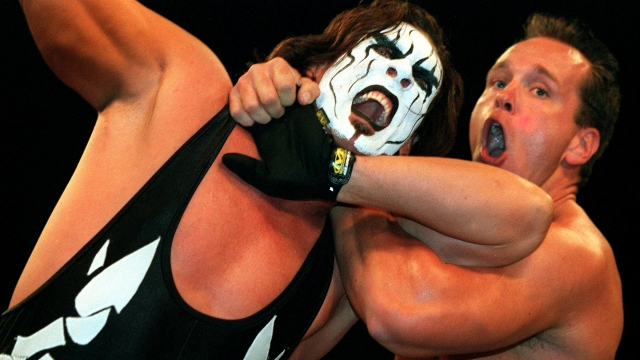 SMS
Wrestling Legend Sting Reportedly Retiring From The Rafters
By Christian Bryant
By Christian Bryant
March 17, 2016
After Sting's decadeslong career, the future wrestling Hall-of-Famer is reportedly planning to retire after his injured his neck in 2015.
SHOW TRANSCRIPT

One of the biggest wrestling stars from the '80s and '90s is reportedly tapping out.

TMZ Sports reports wrestling legend Sting, whose real name is Steve Borden, plans to retire due to a neck injury he suffered in his match against Seth Rollins in October.

Sting is best known for his time in the now-defunct World Championship Wrestling and the World Wrestling Entertainment.

There will be plenty to miss with the painted-faced phenom out of the ring — and perhaps out of the rafters.

Sting's character underwent a pretty notable transformation in the mid-'90s, going from a blonde-haired hot shot with colorful face paint to a Crow-inspired, baseball bat-wielding vigilante who disrupted the disruptive nWo, or New World Order.

The WWE will induct Sting into its Hall of Fame on April 2, the night before WrestleMania 32. TMZ reports he could still take on a non-physical role. We're thinking something like a Vince McMahon, except with more makeup and a better swing.

This video includes clips from WWE and images from Getty Images.