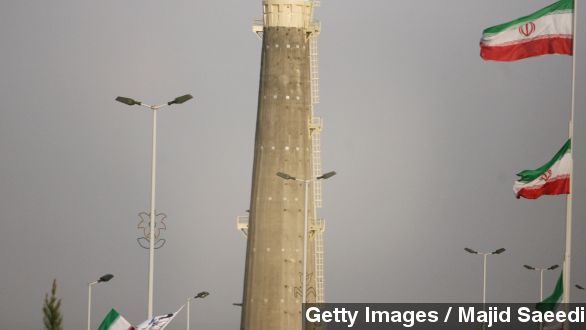 By Elizabeth Hagedorn
March 16, 2015
Saudi Arabia has suggested it will counter Iran's nuclear capabilities if the internationally brokered deal is too weak.
SHOW TRANSCRIPT

"A deal that's supposed to prevent nuclear proliferation would instead spark a nuclear arms race in the most dangerous part of the planet,​" said Israeli Prime Minister Benjamin Netanyahu.

Israeli Prime Minister Benjamin Netanyahu might have had a point when he warned a nuclear deal with Iran could prompt a regional arms race.

"Ending fear of developing weapons of mass destruction is not going to be the end of the troubles we're having with Iran," Prince Turki Al-Faisal, a former Saudi Arabian intelligence chief, told the BBC.

Saudi leaders say if Iran gets to keep any part of its nuclear program, they'll match it.

According to The Wall Street Journal, this could include "the ability to enrich uranium and to harvest the weapons-grade plutonium discharged in a nuclear reactor's spent fuel."

Of special concern is the nuclear deal Iran's currently negotiating with the U.S. and other major world powers.

The Obama administration has said repeatedly any deal would prevent Iran from developing nuclear weapons. This would probably involve Iran majorly scaling back its nuclear program but not dismantling it entirely.

Saudi Arabia has made its disapproval of the deal pretty clear. During a military parade last year, for the first time ever the Kingdom showed off its only nuclear-capable ballistic missiles able to reach Tehran. (Video via Al Saudiya)

Surely no coincidence when you consider the man in charge of Pakistan's nuclear arsenal was a guest of honor at that parade.

That country's nuclear arsenal is easily the fastest growing in the world, and Saudi Arabia has reportedly bankrolled it for decades. (Video via Nuclear Threat Initiative)

Non proliferation experts have speculated that in return for financing the Pakistani nuclear program, the Saudis could cash in on those very nukes to keep Iran in check.

In 2013, the BBC reported Pakistan had nuclear arms packed and ready to send to Saudi Arabia. Pakistan denied the rumors.

Fueling the speculation over Saudi Arabia's nuclear ambitions was a deal signed this month between the Saudis and South Korea, which included a plan to study building two nuclear reactors.

Like most countries, Saudi Arabia is a signatory to the Nuclear Non-Proliferation Treaty, which says countries have a right to develop nuclear energy for peaceful purposes.