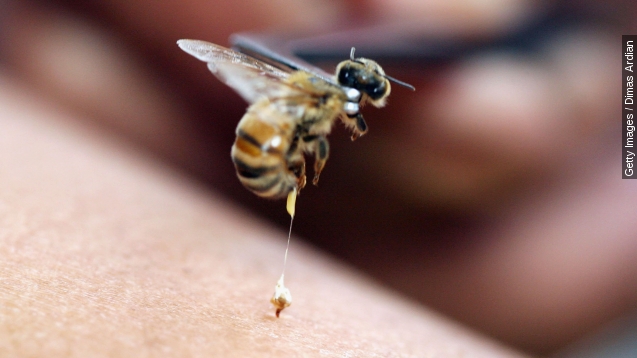 A Cornell University scientist figured out the worst place to get a bee sting.

Michael Smith endured 25 stings in 25 different places before determining that the nostril is the last place you’d want to get stung, beating out the armpit, the back of the neck and, yes, the genitals.

In recognition of his bizarre scientific contribution, Smith received an Ig Nobel Prize, a parody of the Nobel Prize, which is awarded to “achievements that make people laugh, and then think.”

The science magazine “Annals of Improbable Research” has hosted the award ceremony that honors ridiculous, yet completely scientific experiments for 25 years.

They highlight some of the most bizarre scientific study from around the world, like the 2004 biology winning study that revealed herrings communicate through flatulence.

Or the winner of the physics Ig Nobel Prize in 2000 who proved you can use magnets to levitate a frog. (Video via History / 'Modern Marvels')

Or even this year’s biology prize. University of Chile scientists discovered if you attach a weighted stick to a chicken’s tail, it walks like a dinosaur theoretically would. Who knew?

Or Donald Unger, who brought home an Ig Nobel Prize for cracking the knuckles on his left hand every day for over 60 years, while leaving the right ones alone in order to prove knuckle cracking does not cause arthritis.

The Ig Nobel Prize proves that science isn't always glamorous, but it is sometimes hilarious.

This video includes images from Getty Images and Derek Keats / CC BY 2.0.