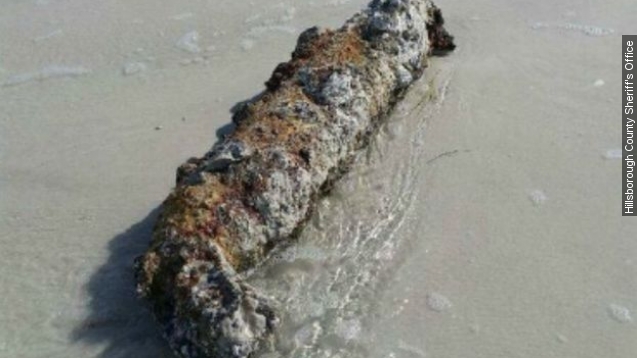 A World War II-era bomb was detonated Sunday after it washed up on the shores of a beach in Tampa Bay, Florida.

Newsy's partners at WFTS report the device was discovered that morning by a person walking along the beach.

The device was identified as a M122 photo flash bomb. (Image via Hillsborough County Sheriff's Office)

Now what's interesting is that despite being classified as an explosive, this type of bomb wasn't designed to hurt anyone.

Instead, Mulvaney's Ordnance Technical Information System reports the M122 photo flash bomb was designed to create a flash of light upon detonation, which then could be used for night surveillance. It was filled with photo flash powder — hence its name.

"We thought it was strange that a World War II bomb would be in the Gulf of Mexico in the first place. But then we found this congressional report that said that many unused weapons were actually dumped in the oceans and the Gulf in the years following World War II," a WFTS reporter said.

Still, after examining the device, Florida authorities decided it was safer to detonate it on the beach, instead of attempting to move it.

WTSP reports nearby homes were evacuated and authorities built trenches around the device so that a nearby sea turtle nest wouldn't be disturbed during the explosion.

The detonation area was still closed off Monday morning so crews could finish cleaning up the area.