World Powers Try To Work Out Pause In Syrian Fighting 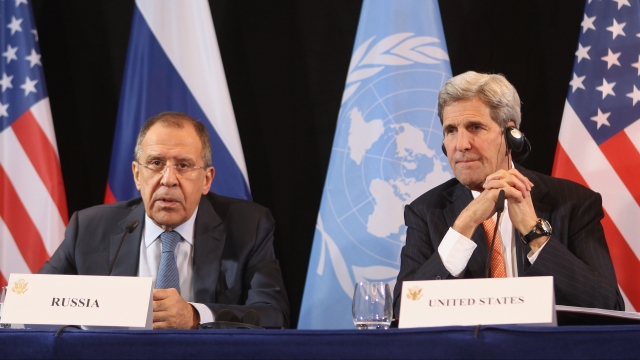 SMS
World Powers Try To Work Out Pause In Syrian Fighting
By Grant Suneson
By Grant Suneson
February 11, 2016
The U.S. and Russia are among the world powers attempting to negotiate a cease-fire in the Syrian civil war. They're hoping for a deal soon.
SHOW TRANSCRIPT

It's not quite a cease-fire, but world powers including the U.S. and Russia have agreed to a pause in the fighting in Syria.

U.S. Secretary of State John Kerry said he wanted to see a nationwide "cessation of hostilities" from international powers within a week, though he admitted that target was ambitious.

Implementing a nationwide truce will require cooperation from Syria's warring factions, and Kerry stressed the fight against terrorist groups like ISIS and Jabhat al-Nusra will continue.

Kerry made the announcement along with Russia’s foreign minister, Sergey Lavrov, which is encouraging since the two countries haven't exactly been on the same side of the civil war.

Russian airstrikes in the region have been targeting anti-Bashar al-Assad rebel forces, while the U.S. has been aiding rebel groups that want Assad gone. Having both countries on board is crucial for sustaining this latest diplomatic push.

It's unclear if diplomats will be able to build upon this planned truce, but the plan will hopefully improve the delivery of humanitarian aid to the besieged areas in the country.

This video includes images from Getty Images and clips from U.S. Department of State and ITV.