World-Class Runners Literally Don't Have Time To Go Any Faster 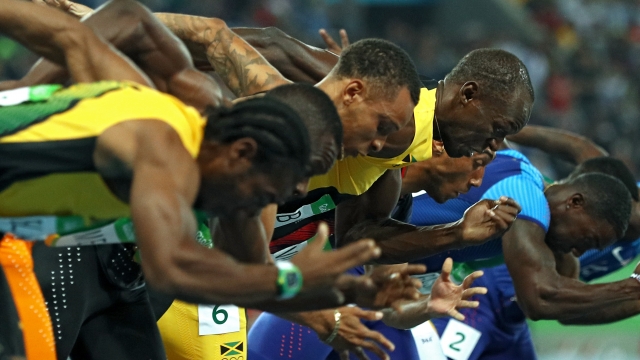 SMS
World-Class Runners Literally Don't Have Time To Go Any Faster
By Evan Thomas
By Evan Thomas
August 17, 2016
Humans could get going almost twice as fast as the current record holder — if our leg muscles could respond that quickly.
SHOW TRANSCRIPT

What makes the world's fastest runners so fast?

It's not how quickly they put one leg in front of the other. Research shows runners of all abilities — you, me and Usain Bolt — move their legs back and forth at about the same frequency when we're running flat out.

SEE MORE: Study Shows Some Paralympic Sprinters May Have It Harder Than Others

The trick to going fast is to apply more force to the ground in the time you're in contact with it. Faster runners are pushing down harder against the ground and spending more time in midair.

You see this elsewhere in nature, too. Cheetahs at full sprint spend more time airborne than touching the ground.

But this contact with the ground creates a sort of speed limit. Since it's so brief, runners don't have enough time during each stride to push as hard as they could. Their muscles just don't contract fast enough.

Researchers in Texas and Wyoming once tested how fast people could theoretically contract their leg muscles by having them hop on one leg on a treadmill.

They found if we could get every bit of power from our leg muscles while running, humans would be able to run as fast as 42 mph. Compare that to Bolt's top speed of about 27 mph.

That's almost but not quite enough to keep up with ostriches. Long, springy legs can propel the birds forward at 43 mph, making them the fastest runners on two legs.