Workers' Rights Get A Boost In 2014 Midterms 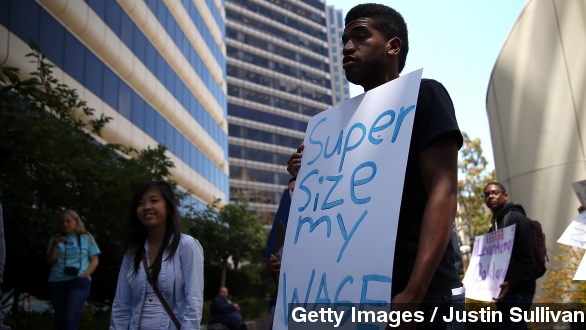 Despite Tuesday's massive victories for the GOP, the ballot initiatives for workers' rights are decidedly progressive.

In a somewhat surprising development, four traditionally red states all passed minimum-wage ballot initiatives and by a pretty healthy margin. They join 10 more states — plus D.C. — that have raised the minimum wage this year.

And while some like Microsoft founder Bill Gates have suggested raising the minimum wage can cause some jobs to disappear ...

MSNBC: "You're encouraging labor substitution that you're going to go buy machines and automate things."

... others like Politico counter, "But a string of economic studies over the past two decades saw little or no employment impact when minimums were raised."

San Francisco joins Seattle as the second city to raise the minimum wage to $15 — the highest in the country — though the initiative isn't set to go into effect until 2018. (Video via Science Channel)

To go along with raises in minimum wage around the country …

Massachusetts was the only state in the country to pass a paid sick-leave initiative. The amendment allows employees who work for companies that don't offer sick time to earn paid time off.

Workers will receive one hour of sick time for every 30 hours worked and can't use more than 40 hours of paid sick time per year.

According to ThinkProgress, those pushing for paid sick leave in New Jersey "have had success targeting not the state as a whole but rather progressive communities within it."

President Obama has been pushing to raise the federal minimum wage to $10.10 an hour for quite some time, but he'd likely have to push it through a GOP-controlled House and Senate.