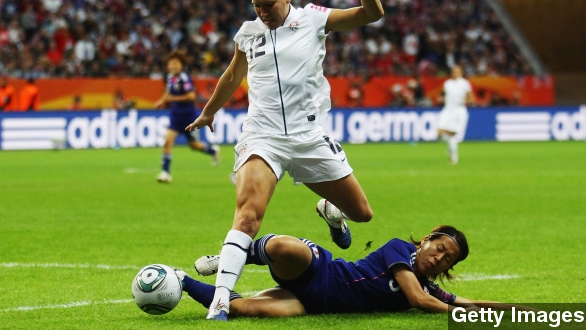 ​With the Women's World Cup in Canada less than 10 months away, some of the world's top women soccer players are threatening a lawsuit against FIFA over a literal turf war.

FOX SPORTS: "Over 40 players from around the world have secured legal counsel and are claiming gender discrimination because the tournament is being played on artificial turf and not real grass."

In a three-page letter to the Canadian Soccer Association and the Federation Internationale de Football Association, otherwise known as FIFA, lawyers representing players from several different countries outlined their concerns.

They say artificial turf makes awesome headers and slides like these impossible, and it can also result in more injuries.

​The letter reads, in part, "The proposal is discriminatory and violates Canadian law. If your organizations will not engage in a meaningful dialogue on how to correct the discriminatory treatment of women players, we are prepared to pursue legal action which we are confident should succeed."

As of Wednesday, FIFA and the Canadian Soccer Association had acknowledged receiving the letter, which was dated July 28. But neither organization has yet responded. And anger is continuing to mount over the issue.

U.S. Women's National Team forward Alex Morgan is just one of the many star players to criticize FIFA's decision to allow the use of artificial turf at the World Cup Finals for the first time ever.

She told CBS the move isn't fair to female players.

​ALEX MORGAN: "The men's World Cup was given brand-new stadiums, brand-new venues around Brazil. And all we're asking for is a great surface to play on."

The 2014 FIFA World Cup for men was played on grass, and there are no known plans to move future men's tournaments to artificial turf, which players consider to be an inferior surface.

And current FIFA Women's World Player of the Year Nadine Angerer told Sports Illustrated she'll do whatever it takes to make sure the women's tournament is played on natural grass, just like the men's.

"From the perspective of goalkeepers, we have to jump on this concrete. We are landing all the time, and it's really bad. ... I can't understand why the women have to play a World Cup on [artificial] turf. Why just for the women and not for the men?"

Many agree with the players' argument this is a gender-equality and safety issue.

Especially after FIFA President Sepp Blatter held a press conference in Toronto and made this particular comment, which was decried as sexist.

"Football is very macho. It's so difficult to accept in the game. Not playing the game, but in the governance."

But a writer for The New York Times says FIFA should let the women play on grass. "To change plans now would require some money, for sure, but FIFA was expected to make $2 billion off the World Cup in Brazil. Why not shake loose some change to allow the women to play on grass?"

Sports Illustrated adds, "Regardless of whether the players' threat escalates into a lawsuit, it's not a good look for FIFA to have the best players in women's soccer talking about taking legal action against the organization."

Last year, several top women players signed a petition on Coworker.org urging FIFA and the Canadian Soccer Association to use grass fields at the tournament. More than 4,500 others pledged their support.

The players say they won't boycott the World Cup if their appeals are denied.