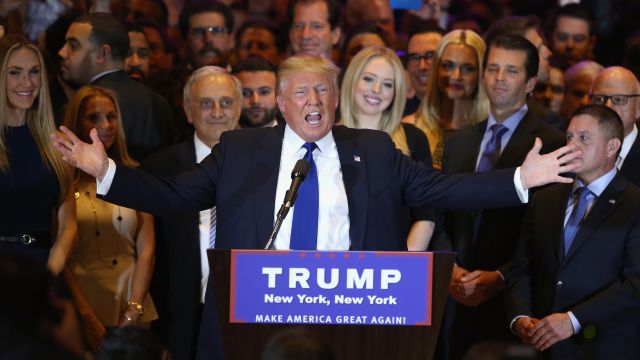 SMS
Trump's Victory Has Some Women Considering IUDs
By Madeline Carl
By Madeline Carl
November 10, 2016
It all comes down to Obamacare and what repealing it could mean for birth control access.
SHOW TRANSCRIPT

Donald Trump's presidential victory has elicited many reactions. Some people cheered. Some cried. Some flooded Canada's immigration website. And some women said now is the time to get an IUD.

An IUD, or intrauterine device, is a long-term form of birth control that can last 3 to 12 years. Some women worry that affordable birth control and other reproductive health benefits might be harder to access under President Trump.

Thanks to President Obama's Affordable Care Act, most women with insurance can get FDA-approved birth control for free. Trump has made it clear how he feels about Obamacare — he wants to get rid of it.

According to Vox, Trump could put an end to free birth control without repealing Obamacare. Preventative health benefits for women are covered by law, but the definition of that is set by the Department of Health and Human Services. So Trump could direct that department to change the definition of preventative health benefits to exclude things like birth control and IUDs.

Some are also concerned about abortion access. Trump has flip-flopped on his stance, but his most recent position is anti-abortion.

Vice President-elect Mike Pence has a strong record of anti-abortion conservatism. In his state of Indiana, he has signed several bills that seek to block funding for Planned Parenthood and put more restrictions on abortion access.

Trump has promised to fill the open Supreme Court seat with someone who shares his own values. He's also said he wants to see the Supreme Court overturn Roe v. Wade.