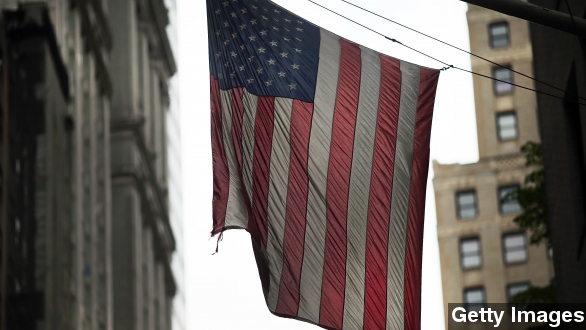 Julia Lease has flown an American flag outside her Ohio residence for the past 36 years, but now she's being told to take down Old Glory.

​LEASE: "They want this flag taken down because they says it detracts from the looks of the apartment complex. Well, I can't see how an American flag can detract from anything."

Eighty-six-year-old Lease says she found a notice on her door but kept the flag up regardless. She was told her complex would send a second notice and take it down — something Lease called "stealing." Fox News seemed to agree with her definition.

"The rental company says tenants are not allowed to hang anything from their units and allowing an American flag would be considered unfair. ... She isn't giving up because the flag is 'something worth fighting for.' Bless her heart."

And now according to The Washington Times, people are stepping up to defend Lease, including veterans groups and politicians.

But a representative for New Life Multi-Family Management, which owns Lease's property, says the policy is "neutral" and it's not about the flag. It's an overarching rule that says no one can affix things to their buildings.

And this seems to fit right in with the string of flag controversies we've seen making the news.

In June, a Marine veteran in Virginia was told to take down the flag outside his condo. Management said it could only be flown during a holiday, a policy his condominium later revised.

"This is the American flag. This is freedom of speech."

​In August, a Georgia woman's homeowner's association told her she had to take down her American and Israeli flags. The HOA said the flags were unapproved.

"She says the flags have been up for two years and says a neighbor has now complained."

There is actually a law that allows people to fly their flags, at least at condominiums. It says:

As for Lease, she's wondering why this is a problem now, after 36 years. We contacted a local reporter who said a new company purchased the complex in 2011. However, that still means three years passed before the company said anything about the flag.