Woman Says 'Revealing' Shorts Got Her Sent Home From Work 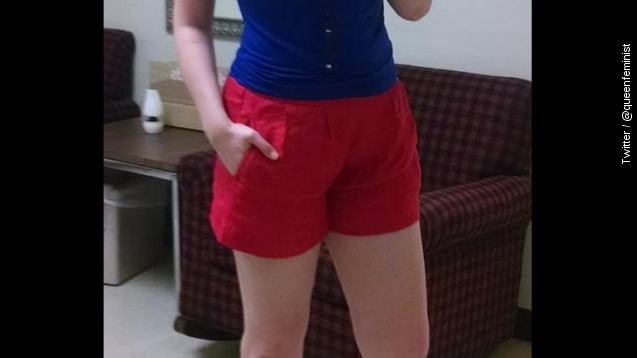 A J.C. Penney employee claims her boss sent her home for wearing shorts that were too "revealing."

But according to her, she bought those shorts at J.C. Penney — where she worked. And she says the shorts were in the "career section."

But she didn't stop there. Sylva, as she goes by on Twitter, said she was asked how long it'd take her to go home and change. She said "probably the whole day" and vowed to never return.

But the company says it wasn't really about her shorts — apparently, J.C. Penney has a thing against all shorts.

In a released statement, the company said, "JCPenney's dress code policy for store associates prohibits the wearing of shorts of any length."

And that goes for men and women.

On the J.C. Penney website, we only found one pair of shorts listed under its "career" section. But those obviously wouldn't fly if you worked at J.C. Penney.

However, disgruntled employee Sylva told the company it needs to update its dress code to the 21st century.

But NBC anchors couldn't figure out what the hullabaloo was about.

"There's a dress code, and when you go to work, you abide to the dress code," NBC anchor Natalie Morales said.

But Sylva had a response to that, too:

"When the rule is unfair we must question WHY it's a rule, WHO made the rule, and then BREAK THAT RULE."

Well, she broke it alright. Oh, and she quit.