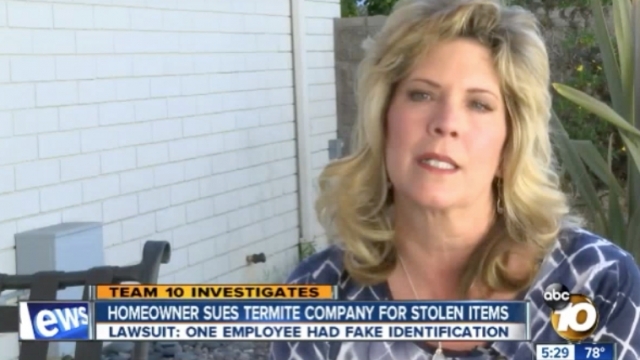 A California woman is suing a pest control company after she says more than $100,000 worth of jewelry was stolen from her home.

"I'm not a wealthy person, but these are things that over an adult lifetime I accumulated," Donna Wolf says.

Wolf, a former jeweler, says she hired Major League Pest Control to take care of a termite problem in her house. She told Newsy's partners at KGTV a couple days after the company came to her home, she discovered the jewelry was missing.

Now Wolf is suing the company for negligent supervising and hiring.

The pest control company's website says it conducts background checks on its employees, but Wolf and her attorney don't seem convinced.

Wolf's lawsuit claims one of the company's employees who came to her home can't be located now. It also says this employee had a fake Social Security number and driver's license. Wolf says if she'd known this before, she wouldn't have allowed them in her home.