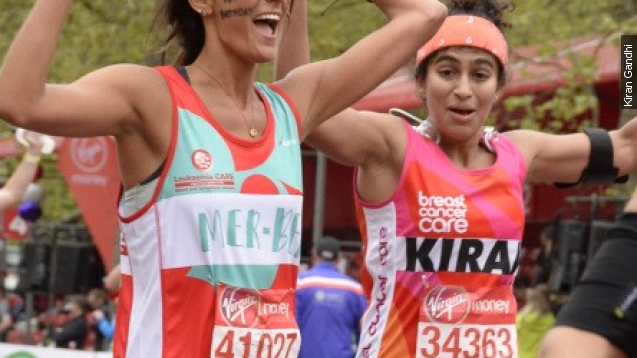 M.I.A. drummer and feminist Kiran Gandhi ran the London Marathon, and she decided to prove a point.

Gandhi wanted to de-stigmatize periods and show women they don't need to be grossed out by their bodies. She decided to bleed freely, not using a tampon – or anything for that matter – while on her period during a marathon for breast cancer.

As she wrote on her website, she ran the entire 26.2-mile race "with my period blood running down my legs." She also wrote: "I ran with blood dripping down my legs for sisters who don't have access to tampons and ... sisters who ... hide it away and pretend like it doesn't exist. I ran to say, it does exist, and we overcome it every day."

Response has been mixed. Some were in support of her actions. Some were not, using the hashtag #AttentionSeeking.

But one executive editor for The Huffington Post wrote that while Gandhi is well-meaning, she may have missed the mark.

"In a rural Indian village, where young girls are likely to miss school because of their periods, if they had a sanitary towel they would use it – they wouldn't let it flow free down their saris to emancipate their sisters."

The editor also compared it to men carrying vials of sperm around their necks to showcase the "life force" they carry.

But the woman who ran with a feminist message in mind may not care what other people have to say about it. Plus, she raised thousands of dollars for breast cancer research.