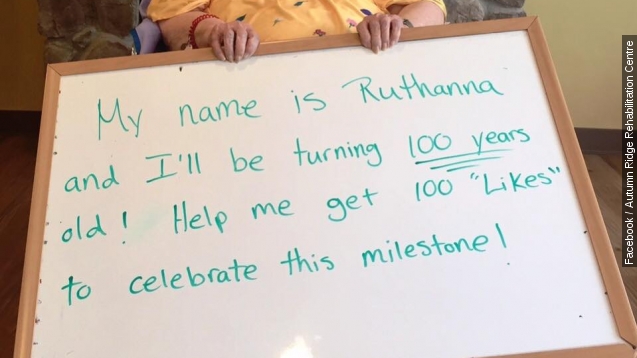 We spoke with her on Skype and she was blown away by the response:

"I was surprised," she said on Skype.

We also asked her the secret to longevity:

"I just kept breathing," she said.

On the now-viral Facebook post, people were commenting she looked amazing for 100. But Ruthanna is apparently not one for flattery:

"Well, I think they might be a little bit blind, I don't know," Ruthanna said.

"They were saying you could pass for 65, easy," Newsy reporter Christine Slusser said.

We also asked the centenarian if she had any advice for us young pups hoping to make it to triple digits.

"Enjoy your young life while you got it," she said.

This video includes an image from Facebook / Autumn Ridge Rehabilitation Centre and music from Kevin MacLeod / CC BY 3.0.