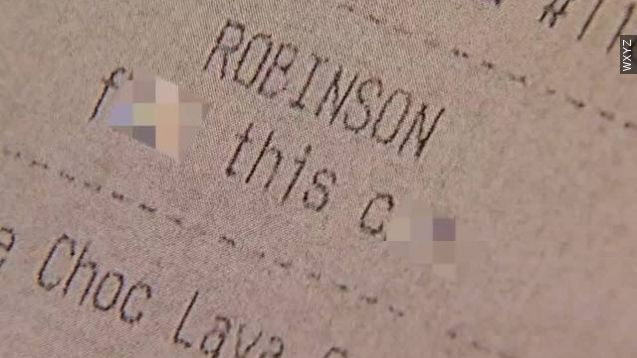 A Michigan woman picked up her Domino's pizza, came home to enjoy a slice and then saw what was written on the receipt. It's nasty enough we can't show it without being blurred on screen or read it out loud, if that tells you anything.

Keenyatta Robinson told Newsy's partners at WXYZ at first she didn't understand why that message was on her receipt, but the more she thought about it, the realization struck.

"I called and I placed another order. When I came up here to pick up the second order, that receipt had the same vulgar remark," Robinson told WXYZ.

"She thought back to what may be known in her family as the sausage scandal of 2014," a reporter said.

"On two occasions, I received a pizza with no sausage, and I called. ... So, they told me I was complaining too much and they couldn't serve me anymore," she told WXYZ.

That wasn't going to fly with Robinson, who filed a complaint with the corporate office against the manager who said the store would no longer serve her.

"That manager was upset about it. He would end up getting terminated, but his parting gift to us was putting that obviously vulgar comment into her phone number's notes," Domino's Director of Operations Ronnie Asmar told WXYZ.

The Dominos Director of Operations said that manager was fired for being rude to customers. He said the employees felt horrible for not noticing the vulgar note.

WXYZ says the message only appears on receipts, and not on the screen when orders are taken. The store apologized to Robinson and offered her a gift card, but she refused and said she'd never order from there again.