Woman Confronts Ben Carson: 'Do You Think I Chose To Be Gay?' 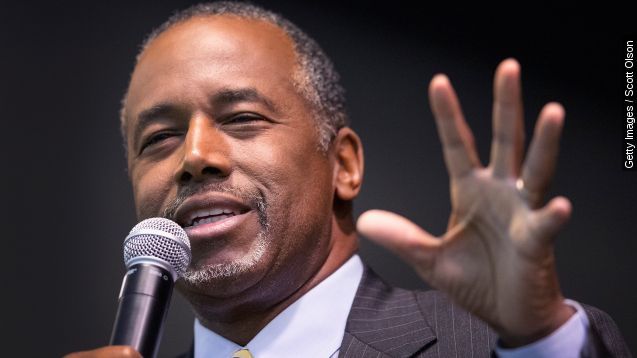 SMS
Woman Confronts Ben Carson: 'Do You Think I Chose To Be Gay?'
By Matt Moreno
By Matt Moreno
January 5, 2016
ABC reports the unidentified woman was wearing a shirt from a local LGBT community center when she confronted Carson after a town hall meeting.
SHOW TRANSCRIPT

GOP presidential hopeful Dr. Ben Carson was confronted shortly after a town hall meeting in New York on Monday by a woman who asked if he thought being gay was a choice. (Video via Ben Carson For President 2016)

The woman asked, "Do you think I chose to be gay?"

Carson responded, "Did you choose to be gay?"

The woman said, "Yeah, did I choose to be gay?"

Carson was in Staten Island when the confrontation took place. The woman asked Carson the question and then walked away. (Video via Staten Island Advance)

While many presidential candidates are susceptible to these confrontations from the public on the campaign trail, this one shows how much trouble Carson might have getting the LGBT community's vote.

Carson has taken heat from the community ever since his comments about gay marriage on CNN last March.

"Do you think being gay is a choice?" CNN's Chris Cuomo asked.

Cuomo asked, "Why do you say that?"

He apologized shortly after the interview, saying, in part, "Up until this point there have been no definitive studies that people are born into a specific sexuality."

Carson and other GOP presidential hopefuls are just weeks away from the Iowa caucuses on Feb. 1. Multiple polls project Carson to finish third or fourth in the state.