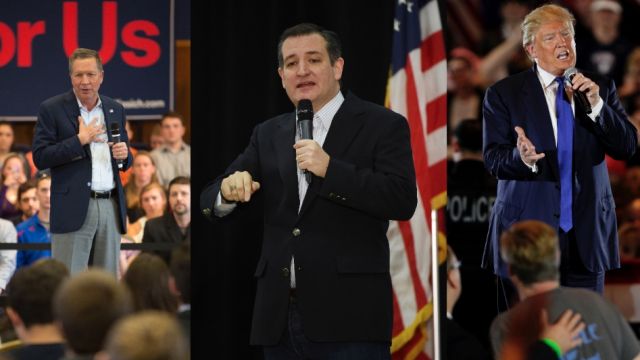 By Stephanie Liebergen
March 16, 2016
The debate was scheduled for March 21 in Salt Lake City. However, with only one candidate willing to participate, Fox News was forced to cancel.
SHOW TRANSCRIPT

The remaining GOP presidential candidates don't have to worry about another debate before more voters head to the polls.

"Nobody told me about the debate. They hit me with it yesterday or something. I said I'm not going to be there, so I'm not doing the debate," Donald Trump said.

Republican front-runner Donald Trump told "Fox & Friends" on Wednesday morning he would not take part in the upcoming debate in Salt Lake City.

Instead, Trump says he's scheduled to make a big speech that night. But his claim that he didn't know about the debate might not be true.

"I think they want to do two more debates, and I guess I'm pretty much OK with it," Trump said March 10.

Ted Cruz supporters have a different theory on why Trump isn't participating.

"I think the reason that Donald Trump bailed out is that he is afraid. As this field winnows down the contrast between a debater who destroys Donald Trump on the debate stage, Ted Cruz, and Donald Trump is very stark," former Virginia Attorney General Ken Cuccinelli said.

Shortly after Trump's announcement, John Kasich's campaign said he wouldn't be at the debate, either, leaving Fox News with no other option except to cancel.

This video includes clips from Fox News, CNN and MSNBC and images from Getty Images.